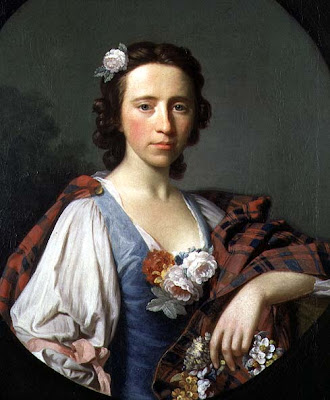 There can be little doubt that Flora MacDonald is one of the most famous Highland heroines. She is, of course, chiefly remembered for the help she gave to Prince Charles Edward Stuart in making his hair-breadth escape from South Uist to Skye. When on the point of being captured, she intervened and disguised the Prince as a maid called Betty Burke who was supposed to be one of Flora’s companions as she was making her way to visit her mother in Skye. The ploy worked a treat and the Prince remained uncaptured. The Prince had been on the lam for a number of months as a fugitive in the wake of his disastrous defeat at Culloden. Flora was born in Milton on South Uist in 1722 and was the daughter of Ranald MacDanald there, and his wife, Marion, a daughter of Angus MacDonald. She later married Allan MacDonald of Kinsburgh, Isle of Skye, and had a large family of five sons and daughters. She died at Kingsburgh aged sixty-eight in 1790 and was buried in Kilmuir Cemetery. Alexander Carmichael collected this historical anecdote about the tragic deaths of two of Flora MacDonald’s brothers, Alexander and Donald, from Donald MacInnes (c. 1800–1880), who belonged to Balgarva in South Uist, sometime in September 1872. It is also interesting to note that the aunt Isobel whom Flora’s brother visited was married to mac Leaspa ’ic a’ Mhinistear who is described as having visited Rìoghachd nan Daoine Buidhe which probably means ‘Kingdom of the Yellow-skinned People’ – perhaps a veiled reference to China – where the king’s daughter had fallen in love with him. Expecting to marry him, the king’s daughter made him a suit of multicoloured feathers, but he returned to Scotland to marry ‘his friend Isebal’.
Alex[ander] brother to Flora Macdonald shot
in Carras[a]y. was on a vis[i]t to his Aunt Isebal
ni[gh]ean fir Airi[dh] mhuil[ean]. Saw a flock of ducks
in the Creagun below the house. He rush[ed]
to the gun not know[ing] it was load[ed] It went
off & kil[led] him. Old Don[ald] who was th[e]n
2 y[ea]rs saw the blood. He was sent
with this Isibel. Isibels hus[band]
was mac Leaspa ’ic a mhinisteir.
He was long in rio[ghac]c[hd] nan daoine bui[dhe]
& the da[ugh]t[er] of Ri[gh] nan dao[i]n[e] bui[dhe]
fell in love with him & ex[horted] him to marry
her. She made him a deise of itean
ian – dhan na chuile dath bha eir ial[aith] nan speur & an deise
e[i]le do shioda agus uisgair eir
But he ran from her & came home & mar[rried]
his friend Isebel.
Flora & the Prince left Buail
Unacleit at Minngeary Milton
& crossed to Lochaoineart fr[om]
which they sailed.
Don[ald] saw her bro[ther] Angus who was
a thorough soldier. Poor Donald! He went
away one day to cut rushes & was found dead
aged