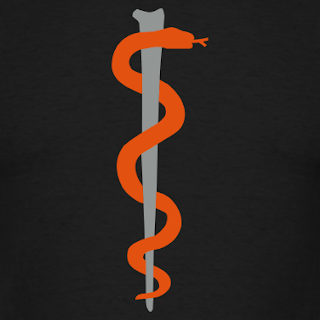 Another anecdote noted down by John Ewen (Iain Eòghann) MacRury, from Torlum, Benbecula, concerns the serpent stone or clach nathrach. Since classical times there has been a strong connection between serpents and healing. One only needs to think of the logo for the British Medical Association with a rod and a single snake wrapped around it. Sometimes this symbol is mistaken for a caduceus, a winged staff with two serpents entwined, carried by Hermes, the messenger of the gods, which later became known as a symbol of peace. Rather the BMA’s logo symbolises the rod of Asclepius, a son of the God Apollo, who was a practitioner of medicine in Greek mythology. No mention of the druidic cult would seem to be complete without the mention of the serpent’s egg or adder stone which was believed to have magical properties.
Clach Nathrach
Is an accumulation
of liquid matter from
the mouth of the
serpent and is alw-
ays found among
rank heather where
it is spiralled by
the serpent going con
stantly round the
stem or stalk till
all the matter ronan
is accumulated on it.
It gets very hard and
of a darkish colour
and light in proportion
to its size. I remember
when in School in Uig
Lewis of seeing one
about the size of a
small hen egg. It was
found by the herd-
boy of Croulista who
was sometimes attend
ing school with me
on the South side
of Suanaval hill.
It was greatly val
ued by the more in
tellegent people who
saw it, as it is
good for taking
away any bad or
rotten matter on
a wounded swelling or
cut. Serpents are
common enough
in Uig, but not of
a big Size. I remem
ber of one being killed
on the public
road in the glen betw-
een Balnakill and
Miavaig Uig. It would
be about a foot
long but very thick
in proportions to its
length. Since then I
have seen plenty of
serpents but the
biggest was in the
Island of Mull in 1889.
It was dead on the public road
between Daircraig
and Tobermory.


Elsewhere in Carmina Carmichael, Carmichael provides some more detail in rather wide-ranging entry under the header ‘nathair’:
A product called ‘clach-nathrach,’ serpent stone, is found on the root of the long ling. It is of steel-grey colour, has the consistency of soft putty when new and of hard putty when old, and is as light as pumice-stone, which it resembles. It is of a globular form, and from one to three inches in diameter. There is a circular hole, about a quarter of an inch in width, through the centre. This substance is said to be produced by the serpent emitting spume round the root of a twig of heather. The ‘clach-nathrach’ is greatly prized by the people, who transmit it as a talisman to their descendants.
There are many sayings dealing with the serpent:–

‘Tha e ann an grath na nathrach dhuit.’
He is in the spirit of the serpent towards thee.

‘The nimh na nathrach aig dhuit.’
The venom of the serpent he has towards thee.

‘Cleas na nathrach cur a chraicinn.’
The trick of the serpent changing the skin.

‘Cochul nathrach is olc a dh’fheumadh tu.”
The sheath of the serpent badly wouldst thou need.


According to the Rev. John Gregorson Campbell, serpents were also associated with healing. Serpent stones (clach nathrach) were a sort of bead used in healing rites to cure diseases for people or livestock, or else they were used to aid women in labour or to protect against enchantment. The sloughed skin (cochall) of a snake, or the severed head, could also be used for healing. Either the stone or the skin was placed in water, which was then given to the patient either a bewitched person or beast to drink in order to aid healing, presumably after a charm had been sung over it. It was commonly thought that these stones had once been used by the druids themselves, and they were sometimes also referred to in Ireland and Wales as ‘druid’s glass’.
References:
Black, Ronald (ed.), The Gaelic Otherworld (Edinburgh, 2005), pp. 219–21.
CW 1/81 fos. 52r–54r.
Carmina Gadelica, ii, p. 335.
Image: The rod of Asclepius.
at 16:07