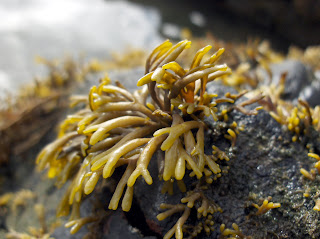 On 14 February 1895, John Ewen (Iain Eòghann) MacRury, from Torlum, Benbecula, noted down a fairly long list of different types of seaweed, giving their Gaelic equivalents, and also writing down interesting details and observations about their properties. The twenty-first item on the list is known in Gaelic as feamainn-chìrean (sometimes cìreanach), which, rather pleasingly, has its equivalent in English as channelled wrack. As can be seen from the following note its properties were well-known and, apart from producing the most productive kelp, was extremely useful for the manufacture of cattle feed, which helped to produce good quality livestock, something which the Western Isles are still renowned for to this very day:
Feamuinn Chirinn the
most productive of all
seaweed for Kelp it grows
higher than any other marine
plant. Just at the height
of tide and unlike other
sea weed is generally ex
posed to the elements of
nature for a period of 18
hours out of the twenty
four hours. It is one of the
best feeding stuff for cattle
when well boiled. The juice
should be allowed to cool
and two pints given to each
beast when stalled at night
and much as a person
could lift twice in his
hand of the feminn [sixed
bith boan?] or clean chaff
or oats or bear or any
other sort of corn, three
times a week during the
month of March and April
It regulates cattle and cle
ans the inside and gives
a very glossy appearance
to the new hair in Summer.

Edward Dwelly notes in his Gaelic dictionary similar properties: ‘feamainn-chìrean or chìreag. It is known as feamainn chìreanach in Uist, and feamainn-chìreag in Skye and Lewis. It is only a few inches in length and grows only on rocks that are seldom under the water during neap-tides. It has a strong laxative property, often being plucked off the rocks and boiled, when it is given to cattle that are suffering from dryness.’ The initials appended to this piece of information are JM and by looking up Dwelly’s authorities that he quotes from throughout his work it can be revealed that this was Rev. John MacRury of Snizort [Skye & Uist.]. This was John Ewen’s elder brother and it may well be the case that this information noted down by him came as a result of an enquiry made by his brother who served as a minister in the isle of Skye for over twenty years until his death in 1907.