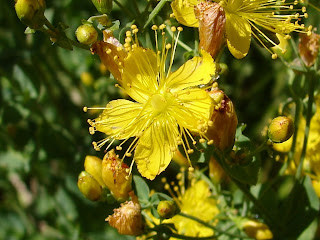 Another short anecdote from Archibald Currie (1821–1896) from Iochdar, South Uist, collected at the same time, was one which concerns St John’s wort or, as it is sometimes referred to, St Columba’s plant. This plant is, in any case, known under many other names in Gaelic such as achlasan Chaluim Chille, which Carmichael literally translates as ‘armpit package of Columba’ and has many medical properties that were well-known to herbalists who practiced folk medicine. The first recorded use of this plant for medicinal purposes stems from ancient Greece. Since then St John’s wort has been used over the centuries for mental conditions as well as for other health problems and it was (and still is) used as a remedy for the debilitating effects of mild to moderate depression:
Achlasan C[aluim]-chille gun sire[adh]
gun iar[raidh] is scraped ag[ainst] its bark & a crosgag
(a ring) is made & place[d] in the
bottom of the milk boyne
Cneapag is the first worsted put
on the fearsaid the round ball
before the crosgag is made
C[alum] Cille the best herd that ev[e]r
lived & this he [presid[e]s?] ov[e]r sprei[dh]


Introducing a piece about St John’s wort in Carmina Gadelica, Carmichael adds that the plant has other very useful properties aside from those which may be termed medicinal. Indeed, St John’s wort could claim to be a panacea for all ills, whether physical or otherwise:
Saint John’s wort is one of the few plants still cherished by people to ward away second-sight, enchantment, witchcraft, evil eye, and death, and to ensure peace and plenty in the house, increase and prosperity in the fold, and growth and fruition in the field. The plant is secretly secured in the bodices of the women and in the vests of men, under the left armpit. Saint John’s wort, however, is effective only when the plant is accidentally found.
Echoing the first phrase to be met with in the above fragment, a fuller version of the incantation was provided by Carmichael:

It is specially prized when found in the fold of the flocks, auguring peace and prosperity to the herd through the year. The person who discovers it says:–