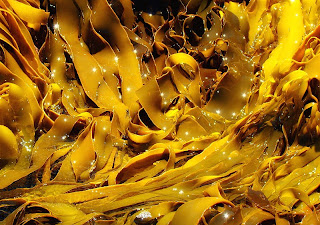 As mentioned in a previous blog, John Ewen (Iain Eòghann) MacRury from Torlum, Benbecula, supplied a great deal of traditional lore, of many different varieties, to Alexander Carmichael. Here, for example, is an anecdote recorded on 18 May 1895 regarding the word ‘Dustaidh’, apparently an English loan-word. The kelp industry (obair na ceilpe) was a mainstay for the economic well-being of the Western Isles for several generations. Kelp – a type of seaweed – was converted by burning it in kilns and the resulting ash was used for many purposes, particularly in the production of soda and iodine. The alkaline product from the ash was also used in the manufacture of soap and glass, and is still used today for this purpose. The versatility of the alginate derived from seaweed can also be seen through its use as a thickening agent in such diverse products as ice-cream, jelly and toothpaste. With regard to the Western Isles, the ending of the Napoleonic Wars, which led to cheaper sourcing of soda ash from continental Europe, meant that the kelp industry had all but collapsed by around 1830. During the boom years, landlords wishing to exploit the profits from this lucrative industry – the price of soda ash had risen astronomically from two pounds per ton in 1760 to twenty pounds per ton by 1808 – crowded families into crofting communities on the western seaboard to create pools of cheap or virtually free labour. The resultant economic collapse was disastrous not only for the profit-mongering landlords but more so for the islanders who faced either involuntary or voluntary eviction as well as an uncertain future.

Dustaidh a modern name for
a bad kelper. The kelp industry
was carried on rigorously on the
West during the later end of last
century and the present century.
A man that did not burn the
seaweed well and in the
usual manner, was known as to
have a great deal of duast
dust, which would require to be
reburnt with some well seasoned
seaweed very carefully. There was
a man in North Uist known as dust-
aidh dust-man after being a season
kelp making in Rona it would not
stick together and the ground officer
who was also kelp officer gave him
a lump sum for his dust and
procured another practical man
to reburn it with his own sea
weed deducting the allowance made
to dustaidh. I cannot say what
became of dustaidh, but a daugh-
ter of his was in Carinish very
recently have only one issue
as son who was also know[n]
as dustaidh og, young duster.
She was know as nighean ruadh
dhustaidh – red daughter of –
duster. She was a very upright
industrious woman, and never
thought of the name, no more than
her Christian name Mary.