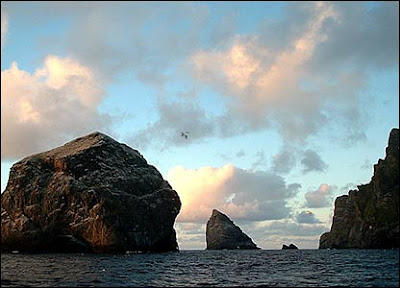 Alexander Carmichael's first of only two trips to St Kilda took place on 22 May 1865. Leaving Lochmaddy in North Uist at the very early time of 4.30 in the morning, the boat then swung north through the sound of Harris, where Carmichael caught sight of St Clement's church in Rodel. A further six hours into the journey St Kilda appeared at 10.30 am.
Islands look magnificent
rising up of the water in the mist.
Slight breeze on the starboard side.
Arrived at St Kilda about 12 noon. Fine
open bay. Bold rocks and remarkably grand.
Landed in first boat. Was at manse. Poorly
furnished but good house. Cameron the
missionary oldish and common looking.
St Kildans good looking s[t]out fellows
with pale complexions. Woman good
looking and ruddy complexions.
Women high shoulders and crouched figures
and bad ankles and feet. Beautiful
white teeth. Pronunciation peculiar
and lisping. People seem to be spoiled
not polite.


After having jotted down his first impressions of the St Kildans and purchasing some cloth and a bottle of fulmer oil, Carmichael continues his narrative:

about ten or eleven years. Kissed her
so as to have to say that I kissed a
St Kilda lassie. Saw men going on
rocks. Fearful sights. The deep blue
fathomless ocean roaring many
hundred feet beneath them. Took out the
fulmars and some eggs. Birds
vomiting oil – painful sights.

Rather surprisingly Carmichael's recollection of his journey stops there but it was the natives themselves rather than the remote isle itself that seems to have left more of a lasting impression.