The Last Great Auk? I 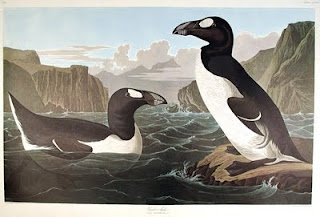 Even before it became extinct, the great auk or gairfowl (Pinguinus impennis) was renowned as one of the most extraordinary seabirds to be found around the Hebrides: a sort of North Atlantic penguin, very rare, large (nearly three feet all), and quite unable to fly. There is some controversy over when the last great auks were killed: we know that a breeding couple (the birds mated for life) was slaughtered on the rocky island of Eldey off the south-west tip of Iceland in early June 1844. Some time in the 1840s, however, in the month of July, a great auk was captured by a party of St Kildans on Stac an Àrmainn, taken back to the village, then killed a few days later. Alexander Carmichael left an account of the event among the many slips of paper he filled with information concerning birds, animals, fish, and plants of the Hebrides.

About 40 years ago or so say about 1848 a party of S[t] K[ilda] people found a Gearrabhal on Stac-a-lì, a stack near Borrery. They brought it home but did not know what bird it was, what to do with it nor what to make of the bird. They knew not what to make of it and they came to no decision that night. They tied a strong cord or rope to its leg and fastened a stake to the other end of the rope and fixed this in the ground. Thus they left the bird all night tethered behind the house like one of their cows. ‘Nuair thig la thig comhairle’ ‘When day comes council comes.’ But the bird had his revenge in the noise he made and the sleeplessness he caused. He cried all night long and made night hideous with his noise. He screamed and roared like a creature possessed and the people got no sleep no rest. In the morning the people met as usual in the daily parliament (Comhairle) and among other matters what they were to do with this demoniacal bird-like creature they caught. The parliament which is composed of all the heads of families in the place and which met daily [decided] that this strange bird or bird-like creature must be possessed of a demon and that it was only a demon that could make [the] noise it made all night long. They therefore decreed that the bird must be put to death and so the bird was put to death accordingly. Every man in the community set upon the poor bird with sticks and stones and staves and attacked him till he was dead. And as the bird took a deal of killing the people were the more confirmed that he was possessed of a demon and they belaboured him accordingly. The body of the bird was then thrown to the dogs of the village and torn asunder by dogs and children. Next year when they came to discover their mistake they were searching about for bits of the broken bones of the bird!

[margin: The children of the village tore off its wings and used the wings upon one anothers ears and after they they were used by the women of the village to sweep the muddy floors of their crubas, their old wall bedded houses. Were there ever such costly brooms used in sweeping the floor of a king’s palace. Each of those wings on the bird would probably today realize £100!]