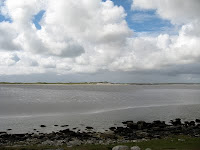 For some time the Carmichael Watson team have been intrigued by a mysterious 152-page manuscript bundle of Gaelic poetry whose author is only described in the catalogue as ‘a North Uist bard’. Julie Fowlis, one of the Sabhal Mòr Ostaig students who visited the project a few weeks ago, herself from North Uist, has kindly informed us that the author is in fact Ruairidh MacAoidh, mac an t-Saighdeir Ruaidh, or Roderick Mackay (1872–1949). In North Uist tradition MacAoidh is better known as Bàrd Iollairigh after the district where he lived, in the north of the island of Baile Sear/Baleshare on the west coast of North Uist. The bard’s work as clerk to the factor of the North Uist estate meant that he was a well-known – and apparently very popular! – figure in the island as he travelled from township to township collecting rent. This reminds us of the tax-gathering duties Alexander Carmichael had to carry out as part of his excise work. However unwelcome his arrival might be to locals, the occupation gave Carmichael an unrivalled opportunity to get to know the people of Uist and Barra, and for them to get to know him.

The bundle in the collection is the bard’s own poetry manuscript, published in Glasgow in 1938 as Oiteagan á Tìr nan Òg [‘Breezes from the Land of Youth’] under the auspices of the Uist and Barra Association. The bard’s original versions were lightly edited for spelling and grammar before publication by Hector MacDougall (1880–1954), the prolific Gaelic author from the Island of Coll. The manuscript came into the possession of Carmichael’s grandson James Carmichael Watson (1910–42), from whom it ended up in the Carmichael Watson Collection where it is catalogued as CW MS 211.

Although the manuscript may not add anything new to what we know of MacAoidh’s work, it draws our attention to a very skilful, vivid, and humane poet gifted with a remarkable command of language and a keen eye for the quirks of his fellow islanders and of island life. 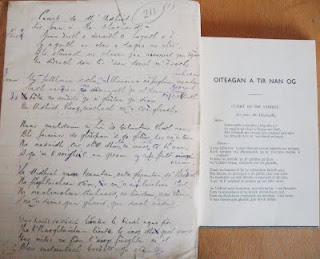