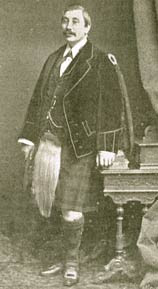 “Is obair latha tòiseachadh”
“Beginning is a day’s work”
No doubt Alexander Carmichael was familiar with such a proverb for he collected a great many of them which he generously provided to Sheriff Alexander Nicolson (1827–1893), the compiler of the most extensive collection of Gaelic proverbs. Nicolson, of course, acknowleged Carmichael’s unsolicited assistance, as he wrote in his preface to A Collection of Gaelic Proverbs and Familiar Phrases (1881): “The largest and best collections were received from the Rev. J. G. Campbell of Tiree, and Mr. A. A. Carmichael, North Uist. Both came unasked, and were supplemented, as occasion required, by illustrations out of the rich stores of Gaelic Folk-lore, Poetry, and Tradition, which both these gentlemen are every ready generously to communcation to those interested in them.” Carmichael sent some of his collections of proverbs to Nicolson, who was by then a sheriff in Kirkbudbright, in October 1875. During the intervening years, before the book made its appearance, it would come as no surprise at all if Carmichael continued to supplement the sheriff with even more proverbs. Given his generous nature, Carmichael would have been aware of the proverb: “An làmh a bheir ’s i a gheibh” / “The hand that gives is the hand that gets.”