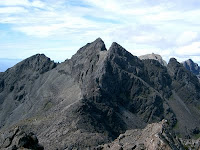 As a tribute to his friend and fellow collector, Carmichael penned an elegy for Sheriff Alexander Nicolson (1827–1893), that was published in The Celtic Monthly. A few things may be gleaned from this: the affection that Carmichael felt for a close friend that he lost; that they had become acquainted with one another from around 1865; that Carmichael had a literary bent and, as far is known, was the only piece of original verse ever to be published by him under his own name.
ALEXANDER NICOLSON, LL.D.,
ADVOCATE.
(From a fellow-worker and a friend of twenty-eight years’ standing).
Farewell thou genial bard of Skye,
Who loved her dale and fell;
Who roamed her hoary peak on high,
And eke her eerie dell;
Who loved her people and her tongue,
Her tongue that Ossian knew,
Thou well beloved of classic song,
To thee my fond adieu!
Gone, the cultured and the true,—
The heart that knew no guile,
The eye that looked through heaven’s blur
The spirit pure, were thine.
I sing no amaranthine lay,
No gorgeous bowers I bring:
Mine but the lily of the vale,
The snowdrop of the spring.
Alexander Nicolson was born in 1827 in Husabost, near Dunvegan, son of a farmer and landed proprietor, a tacksman under the MacLeods, on the isle of Skye. After studying theology at Edinburgh University, he gave up his plans to join the Free Church ministry and was working as an editor and journalist when he was appointed examiner for the Lothian District. Nicolson served as examiner for only a few years before leaving to pursue a legal career. He was called to the Scottish Bar in 1860, but obtained little practice as an advocate. He was subsequently appointed Assistant Commissioner for the Scottish Education Commission in 1865, in which capacity he visited and inspected the schools of almost all the inhabited Western Isles. In the very same year that he declined an offer of the chair of Celtic at Edinburgh University, a position which Professor J. S. Blackie had been instrumental in founding, Nicolson, in 1872, accepted an appointment to became sheriff-Substitute, or stewart of the stewarty of Kirkcudbright as it was known then, where he remained until 1885, when appointed sheriff-substitute of Greenock. Only four year later, however, in 1893, on grounds of ill health he was forced to retire. Nicolson never married, and died in Edinburgh of heart disease in 1893. His obituary in the Scotsman portrays him as a popular, genial man with ‘a great fund of humour’, and a keen Gaelic scholar who ‘rejoiced in all Gaelic things’ and was passionate about his homeland of Skye, but who failed to apply himself fully to any branch of industry. Despite that he wrote in a brief autobiographical sketch: “I would rather be remembered as the composer of one good song, than as the writer of many respectable and superfluous books”, Nicolson is chiefly remembered for his revision of the Gaelic Bible (at the behest of the SSPCK) and his collection of Gaelic proverbs and, of course, as the man who gave his name to the highest peak of the Black Cuillin in the isle of Skye: Sgurr Alasdair (‘Alexander’s Peak’) which he first ascended in 1873.