Another Glimpse of the Professional Weeper 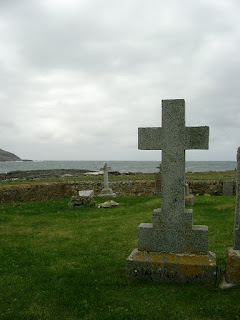 Alexander Carmichael’s Carmina Gadelica is one of the principal sources for information about the bean-tuiream: the mourning woman or professional weeper. An account has already been published in this blog for 30 January 2011, in which a quote is taken from CG ii, 309. There Carmichael reminisces about how, in 1870, he had ‘prevailed upon a woman in Barra to do the “tuiream” as she had heard it when young.’

More information about this intriguing episode is preserved in papers in CW383, apparently the text of a lecture given by Carmichael, probably in the 1890s. The keener is revealed to be none other than Catherine Pearson or MacPherson (c. 1813–1880), wife of Alexander MacFarlane, Ceann Tangabhal, Barra. Despite a reputation for witchcraft, Catherine, together with her brother John (c. 1820–1885), was clearly one of Carmichael’s favourite informants in the island. We hope to have more anecdotes about Catherine in subsequent blogs. The text below has been lightly edited for legibility:

The old custom of mourning, called in Scottish Gaelic tuireadh, in Irish caoineadh, ceased in the Highlands many years ago. Upon one occasion, however, the writer had the privilege of being present at a funeral in Barra where a woman was prevailed upon [supra: very unwillingly] to reproduce this lost art. [del: The woman is now dead but the writer sees her still before him. Her name] [supra: She was called] Catherine Phearsan.

She is now dead but the writer sees her still before him with her [supra: tall] spare figure which [supra: in youth] must have been once singularly handsome, her good prominent features, her fine, large blue eyes, silvery hair, and voice of great flexibility and compass, and [supra: her copious] [del: a] command over the Gaelic language, truly marvellous.

She was richly endowed by nature but not by art, mentally and physically.

This woman rehearsed in weird, [?] and measured cadences of great attraction to my untutored ear the deceased man’s kindly deeds and manly actions by sea and land, his kindreds for generations back, his relationship to long lineaged proud chiefs, ‘and fair women and brave men’. She pathetically told too of the prostration of the fair young wife with her swan-like bosom thus laid bare to the weary wintry blasts and of the tender nestlings thus bereft of a loving father whose brave heart, strong arm and deft hands was wont to bring them home the white ling from the angry sea, the brown barley from the laboured field, the juicy cockles from the distant strands and the good puffin from the towering cliff. The bare glaciated hill high overhead re-echoed the woman’s voice, whilst the deep rolling restless, heaving sea underneath our feet seemed to moan as if in sympathy.

We buried the man in Brendan’s lovely burying-place near the base of an amphitheatre of hills benignly looking down and surrounded on three sides by the sea. The glorious Atlantic sings requiem to the dead in a voice, now louder than loud thunder wakening terror in the trembling earth, and now softly sighing with an eerie sugh like the hallo[w]ed tones of dying love.

Carmichael certainly recorded Catherine or Catriona Pearson on 21 June 1870 (if indeed the year given in Carmina Gadelica is correct). He visited her brother John on 2 December and, perhaps, 2 June. We know he was on Barra on 30 September, 6 November, and the 1 December as well. We wonder if any of our readers could help us in working out who might be the crofter-fisherman of Castlebay, with widow and young children, who was mourned by her?

Image: The burial ground at Gob Bhuirgh, Barra
at 15:13