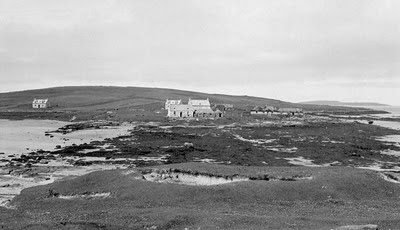 Oidhche Challainn or Hogmanay tended to be an occasion celebrated by groups of boys. Hallowe’en (Oidhche Shamhna) and All Saints’ Day (Latha Samhna) were rather different: in the words of Margaret Fay Shaw writing about her time in Gleann Dail/Glendale in South Uist, ‘a night of much jollity, when the house was invaded by visitors in the ugliest disguises they could contrive of sheepskin and unravelled rope.’ It was also, as she goes on to remark, a time for ‘the foretelling the future of sweethearts’, not just in the Hebrides but throughout Scotland, Ireland, and far beyond. Here are Alexander Carmichael’s later transcriptions and expansions of notes on these calendar customs, originally recorded in CW111/15. The stories were probably been jotted down from Gilleasba’ Domhnallach or Archibald MacDonald (c. 1829–1922), a griasaiche or shoemaker in North Uist on 20 November 1873; they precede the items given in a previous blog.

Gilleasbaig, whose first name was mistranscribed by Carmichael as Alexander in Carmina Gadelica ii, 376, lived in Port nan Long or Newtonferry, where his father Donald had been ferryman. With his wife Margaret or Peggy (b. c. 1841) he had three children: Catherine Margaret (b. 1868); Donald (b. 1870); and Angus (b. 1875). When Carmichael visited the family in 1873 they were probably sharing the house with Gilleasbaig’s unmarried sister Mary (b. c. 1823), his apprentice Archibald Munro from Harris (b. c. 1851), and a local servant Christy MacDonald (b. c. 1846). By the time of the 1891 census Gilleasbaig was a widower, living alone with his daughter Catherine. Rather unusually for a man of his age, he is recorded as being able to speak English as well as Gaelic; this, and the knowledge he would have acquired from his trade of the people in the surrounding townships, may have been the reason why he was in charge of the local Post Office. We might wonder, however, just how strong Gilleasbaig’s grasp of English really was: ten years later, with all three of his children back living with him in what must have been a relatively substantial house, he appears as speaking Gaelic only. A picture of a refurbished Newton Post Office, Gilleasbaig's home, taken by Alasdair Alpin MacGregor, is printed on p. 144 of Bill Lawson's North Uist in History and Legend (Edinburgh: John Donald, 2004).

Gilleasbaig Domhnallach died of influenza on 25 February 1922. Only a neighbour was present, who gave his deceased wife’s name as Catherine MacDonald née Stewart: evidently it was known that his daughter Catherine Margaret had been named after his wife, but the wrong name was given. Born c. 1829, Gilleasbaig is a very unusual example of an informant who was born before Alexander Carmichael and outlived him – and, we can be sure, almost all of his contemporaries.

La Samhna Goid a chail [All Hallows’ Day, stealing the cabbage]. Girls put cal under the pillow. If a girl sees her lover talking the cal from under her pillow she is to be married to him that year. Three plates, one of earth, one of salt, and one of clean water are placed on the floor. A girl is blindfolded and the plates are moved about. The girl is then led to the plates, into one of which she places her hand – each place indicating something, as the uir, earth, death; the salt (bitterness) diolanas [illegitimacy]; and the clean water, marriage!

[in left margin: See Burns] The girls went to Allt criche a mach stream, when they dipped their hands. They were not to speak till spoken to in their sleep and the speaker then was their lover.

Clear water was put into a glass. The white of an egg – gealagan uibhe – was gently let down. If the white rose craobhach briagh [beautiful like a tree] it was fortunate; if not, the reverse. Salt, drowning; dirty water meant Diolanas. A craobh chorc, an oat tree-stalk, was drawn out of a stack by the teeth. The number of grains remaining indicated the number of children. If the top grain – ‘graine mullaich’ –was off, the person died.

Reference: CW7/31
Image: Port nan Long in the fifties: Gilleasbaig Domhnallach may have lived in one of the derelict blackhouses on the right.
at 15:31