A Weekend in Appin 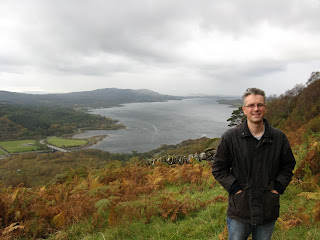 Last weekend I was lucky enough to be invited to give a paper to the Appin Historical Society on behalf of the Carmichael Watson Project. The drive up was rather eventful, with a caravan crash (luckily, nobody was hurt) a few seconds ahead of us at the Brander Pass necessitating a lengthy detour via Rannoch Moor and Glencoe. Nevertheless, we arrived at Port Appin Hall only five minutes late!
The subject of the paper was the lore and traditions of Appin which Alexander Carmichael gathered in the district during three days of intensive collecting in the late summer of 1883. Most of the paper was devoted to the wonderful material he scribbled down from the recitation of Donald MacColl (c. 1793–1886), ‘Domhnall Brocair’, the foxhunter then living at Fasnacloich up in Glen Creran. In his younger days Donald had met both Sir Walter Scott and Duncan Bàn Macintyre, Donnchadh Bàn nan Òran. He reminisced about both these literary giants to Carmichael, as well as about his own experiences during over fifty years of gamekeeping. Other stories Carmichael recorded relate to the Battle of Culloden, at which Donald’s paternal grandfather had been badly wounded and was lucky to escape with his life; to Colin Campbell of Glenure and the notorious Appin Murder; to the local hero Domhnall nan Òrd, the ‘Donald the Hammerer’ whose picaresque adventures so fascinated the youthful Walter Scott; and especially to the local MacColl burial ground Cladh Churalain, perched half-way up Beinn Churalain on the north side of Loch Creran. The ninety-year old Domhnall Brocair, clearly hale and hearty despite his great age, took Carmichael on a visit to the graveyard and its associated healing springs. One story he told particularly caught Carmichael’s imagination: the burning in the late eighteenth century of what appear to have been wooden images of saints Columba, Moluag, and the local holy man Curalan by three ‘scamps’ – sons of the gentry of the district, who all suffered divine retribution as a result.
The great thing about researching a paper on very local subjects is that you have to read the relevant manuscripts extremely closely. The field notebook in which Donald MacColl’s lore was recorded – CW120 – is horrendously difficult to read and leaps seemingly at random from subject to subject. Here I’d like to pay tribute to the transcribing abilities of our erstwhile colleague Dr Andrew Wiseman and the tireless and patient cataloguing of Kirsty Stewart.
The great thing about giving a paper on very local subjects is the feedback – and also corrections! – I always receive from people much more knowledgeable about the area than I am myself. I’d like to thank all those who attended, from Appin and further afield (including Lismore, Ardchattan, Oban, Taynuilt, Morvern, and the Isle of Luing) who kindly took the trouble to chat to me, to enlighten me, and to put me right! Especial thanks to Ronald and Sylvia Laing of the Appin Historical Society for their generous hospitality, and also for showing me two photographs of yet another ‘Carmichael informant’ – Janet MacColl the dairymaid, whom Carmichael met when hiking to Cladh Churalain with Domhnall Brocair:
‘Mòran taing a Chrìosdaidh chneasda’ said [supra: old] Seonaid Nic Colla, Glasdruim, when I helped her up the bank. [CW120/90; see also CW120/178]
Ronnie also told me the intriguing fact that the photographer Erskine Beveridge was taking landscape photographs in Lismore and Appin at exactly the same time as Carmichael was collecting lore there – surely they must at least have met? 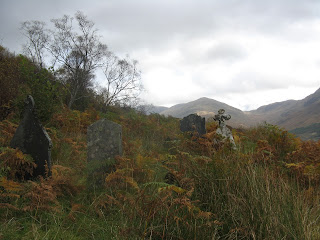 Saturday morning was spent rambling in Carmichael’s footsteps up through scrub birch, old oak, and bracken to reach (thanks, GPS!) the graveyard of Cladh Churalain. Despite a couple of soakings, we had wonderful views and thoroughly recommend this fascinating site to our readers.
Images: Cladh Churalain
at 18:53