“Your Gaelic intuition must be extraordinary” 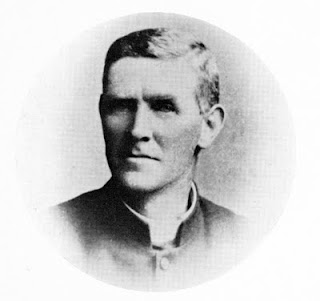 Fr. Allan McDonald and Alexander Carmichael were regular correspondents from at least the mid-1890s if not earlier until the former’s lamentably early death that took place on his adopted isle of Eriskay in 1905. This interesting and important letter was written just after Fr. Allan had received and obviously absorbed a great deal of Carmina Gadelica which, after all, had been a long time in the making and to which he had been given due acknowledgement in the introduction to Carmichael's masterwork. In general terms, the letter praises the work although at one particular point it is couched in irony bordering perhaps even on the sarcastic. One wonders whether Carmichael even detected this. Fr. Allan was in a position to know for he had done a great deal of collecting himself and he knew – though perhaps he does not state this explicitly – where Carmichael had been disingenuous with his sources and had been gilding the lily.

Eriskay
Sept[ember] 20th, 1900
Dear Mr. Carmichael,
The “Ortha” arrived safely and I am very thankful for it.
The work is well done. I am not surprised now at your delay. There is nothing to cavil at and everything to admire in the finished book you put together. The notes come in so well, scattered as they are instead of being all kept for the end. They balance the book and keep the interested equally divided between the sweetness of the hymns and the variety of your own patient researches. The translation is marvellous. It is a puzzle to me how you were able to interpret what I know the reciters themselves would tell you they could not understand, and yet when I read any such piece and look at the translation I say “Yes, it must be that”.
Your Gaelic intuition must be extraordinary. I once used to think that Alasdair Mac Mh[aighsti]r Alasdair coined words impromptu to express his feelings. If it had been the case, you intuition would have interpreted.
The English translation could not be excelled.
Your vocabulary is the most interesting I ever read. It hasn’t even the fault that the man found with Johnson’s English Dictionary when he said it was good reading if it didn’t change the subject so often. Every page of your vocabulary affords only another phase of the Gaelic spirit and culture.
You have done what no other could do now. Forty years have worked havock [sic] in our traditions. You stepped in and picked up these fragments in the search, and they more than anything else that we have will prove to the world the thoroughness of the Christianity that was spread from Iona and the piety of the people whose life in its every action was but a new act of worship of God. The traditions and the spirit are nearly gone and a bombastic bluster with no high or distinct ideals is nearly all we have left.
Many a time I have said, when hearing a pretty expression of politeness of the old Christian kind: What a fine old people were here when these expressions and the like of them were the natural expressions of the heart and not a mere lip of courtesy and politeness.
You have linked us with the Christian past, the best era that the Scottish Gael ever had, and have given us something more to be proud of than broadswords and bloodshed.
I am glad your picture is in the book. It could be nowhere better framed and set then there.
With thanks and congratulations and very good wishes,
I am, dear Mr. Carmichael
Yours truly,
Allan McDonald
P.S. Kindest wishes to Mrs. Carmichael and Miss Carmichael