How John Campbell Landed Up in Scalpay, Harris 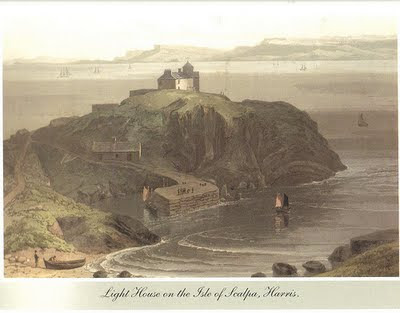 It is not clear from whom Alexander Carmichael collected this historical anecdote concerning the progenitor of at least some of the Campbells of Scalpay, Harris. Although some of the details may have been exaggerated in the telling before they were committed to paper, there are normally kernels of truth in these type of family origin legends. It is interesting to note that if there is any truth to it the Campbells preferred to marry into Skye families rather than to take local Harris women. Could it have been that they still got preferential treatment as a favour from MacLeod? It may also be of interest that Carmichael notes the finding of a stone with the initials R.C. inscribed upon it and it may be reasonably conjectured that they stand for Roderick Campbell and an attempt may be made to try and tie up the family origin legend with this bit of material culture. Perhaps, though, Carmichael’s surmise in this instance goes a step too far but one of the earliest recorded mentions of these Campbells is a certain John Campbell or Iain Òg, his patronymic in early estate papers is given as John oig mc ean vc Innish or Iain Òg mac Iain mhic Aonghais: John son of John son of Angus. In all likelihood there is probably a connection between these two John Campbells:
The Duke of Argyle[’]s eldest son & MacLeod
of MacLeod’s eldest son were boys together at the Royal
High School Edin[burgh] or at the University. The Duk[e’s]
son & a gille Gal[l]da quar[elled] The latter was big & old
and was ill us[in]g the latter when young MacLeod step[p]e[d]
in to as[sis]t his young friend The 2 gave such a thrash[ing]
to the gille Gal[l]da that he died from the effect and
the two boys got so frightened that they fled home to Dun
veag[an] & then to Harris. The Duke sent for his son
sever[al] times but the would not go. MacLeod to his hon[our]
gave young John Campbell his choice of any
place in Harris & when young MacLeod came
to the pro[perty] he treated the family of his young friend with
much kindness. Of course young Campbell
and his suc[cessors] mar[ried] with the best families
in the isles – always took their wives from
Skye or at all events not fr[om] Harris This was
some[time] ab[ou]t the year 1600. Has the stone at Scalpa
anything to do with this with its letters R[oderick] C[ampbell]
and 1601? It was found at Lochsiphort when
qua[rryin]g for the Lighthouse at Scalpa. It was
und[er] much rubbish in a cleft in the rock and hid[?]
by the site of an old smithy.

Image:
Lighthouse on Scalpay, Harris
at 14:12