Friday saw another milestone for the Carmichael Watson Project as the 2,500th item was catalogued (ref. Coll-97/CW116/16 folio 4v). The item relates to a man called Taogai MacCuinn who is said to have been the progenitor of all the MacQueens in Skye and Uist. He is described as being litigious and the item tells how he 'got off' a charge of crop damage.

Taogai MacCuinn from whom descended
the MacCuinns. This Taog was litigious. He had a
g[rea]t law plea about corn damaged. He wa[s] pur[sued] for
this corn & he sug[gested] that the inj[ury] might have been down
to the seals rolling them[elves] over the corn & he got off.
He lived in Trotarnish Skye from him all
the MacCuinns in Skye & Uist.
This nugget of information was collected by Alexander Carmichael on Taransay from a man called Ranald MacDonald (c1834-1913), who was a sheep farmer and the son of John MacDonald, tacksman of Taransay, during his visit there in July 1870. 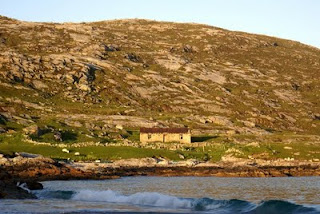 So far, these 2,500 catalogue entries cover over 500 subjects, 130 families, 800 people and 1,300 places. You won't have too long to wait until you can explore these items for yourself as the online catalogue is due to be made live during our conference "Alexander Carmichael: Collecting Controversy and Contexts" on Thursday 23 June 2011.
Reference: Coll-97/CW116/16 folio 4v.
Image: Loch na h-Uidhe, Taransay © Copyright Peter Standing and licensed for reuse under Creative Commons Licence via http://www.geograph.org.uk/
at 12:15