The Curse of Neist 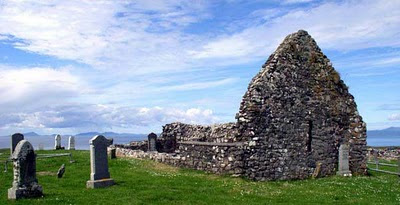 Among transcriptions of various well-known Gaelic songs that Alexander Carmichael wrote down in  rather a neat hand appears a verse entitled Ùrnaigh Chlann Leòid (‘The Clan MacLeod’s Prayer or Petition’). This rhyme has been collected on a number of occasions and one – a thirty-four line version – was collected, or at any rate written up, by Carmichael and printed in volume four of Carmina Gadelica. Appropriately enough, it was collected from, among others, Archibald MacLellan, a master-mariner from Lochboisdale, South Uist. Carmichael also notes that it was known in Barra as well as on the mainland Highlands in Kintail. Sometimes this particular rhyme is connected with the Clann Mhuirich, or MacVuirichs, who are afforded powers of magic in Gaelic tradition. But perhaps it is best to see this rhyme as part of the historical tradition of a remnant of MacDonalds trying to make an escape from the sixteenth-century battle known as Blàr Milleadh Gàraidh, or the Battle of the Spoiling of the Dyke. Briefly, the MacDonalds arrived by sea from Uist on the first Sunday of May in 1578, set fire to Trumpan church, and burnt the entire congregation apart from one teenage girl who managed to escape to Dunvegan castle to warn the MacLeods of the atrocity. The MacLeods lost no time: waving the fairy flag, they avenged themselves on the MacDonalds. It is said that all the MacDonalds of the raiding party were put to the sword and after the slaughter all their corpses were dragged over to the side of a stone and turf wall which was then subsequently thrown over them. Such was their heinous crime and act of butchery that it was so deemed that they did not warrant a decent burial. If there is any credence to this tradition then some of the MacDonalds managed to make their escape by fleeing in a galley but only, it would seem, to have been fated to a watery grave rather than to the one met by their comrades who had died in battle. It may be added that this atrocity was carried out by the MacDonalds in order to exact vengeance on the MacLeods in return for a similar atrocity on the isle of Eigg some two years earlier.
Urnaigh Chlann Leoid


The word curse perhaps describes this verse better than a prayer. It is usually referred to as The Curse of Neist and might be translated as follows:
A south-west wind towards Eiste point
Dark night of mist and rain
Clan Donald on a breaking board
I pity them not
Galley crank and narrow
Sails high and peaked
Crew weak and angry
Without respect for one another