Carmichaels in the Census - II 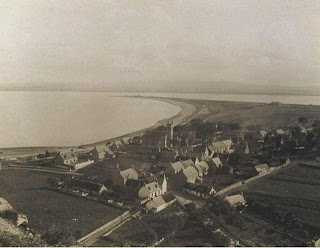 Mary Frances MacBean, future wife of Alexander Carmichael, was born as Mary Urqhuart MacBean in Kirkiboll, in the parish of Tongue in northern Sutherland, on 31 October 1837. She was daughter of Kenneth MacBean (b. 1809) and Elizabeth or Elisa née Fraser (1812–47). Kenneth had been born on 26 January 1809 to John MacBean (1761–1843), then grieve at Davidston on the Black Isle, later farmer at Flowerburn Mains, Rosemarkie, and his wife Mary Urquhart (1773–1853), the paternal grandmother after whom our Mary was named. Kenneth MacBean married Elizabeth Fraser on 20 February 1835, when working as an exciseman in Fortrose. The couple had two other children: Mary’s older sister Anne Calder MacBean, probably called after her mother’s sister, was born on 7 December 1835 in the parish of Inverkeithing, Fife, while a younger brother John Fraser MacBean, probably named for both his grandfathers, was born in Kirkiboll on 12 February 1839.
Although contemporary records are scant, it is difficult not to draw conclusions about Mary’s childhood and youth. A restless and rootless upbringing, punctuated by a catastrophe, or even a series of catastrophes, do much to explain her drive, resourcefulness, and strength of character; it may also help to explain why Mary Urquhart MacBean the child would go on to recreate herself as Mary Frances MacBean the adult. Here is her grandson James Carmichael Watson (1910–42) writing about her in the fourth volume of Carmina Gadelica:
My grandmother’s forebears for many centuries had belonged to the Black Isle in Ross. Her father was Kenneth MacBean (or MacBain), civil engineer, of Kessock Ferry, and her mother Elizabeth Fraser, daughter of John Fraser of the Ness, Chanonry. John Fraser, her maternal grandfather, had been an employee of Broadwood the piano-maker in London, and, retiring to his native croft, his own ancestral property, became the Inspector of the Poor in Fortrose. Her father was alive at the time of her marriage, but her mother died while she was still a child, and she had neither sister nor brother. [CG iv, xli]
James’ grandmother clearly identified with her mother’s family rather than her father’s.
The 1841 census shows the three-year old Mary Urquhart living with her parents, elder sister, and younger brother in Bridge Street, Montrose, the latest excise posting of her father. Within a few years the family would fall apart.
On 15 March 1847, when the MacBeans were living in Perth Road, Dundee, Mary’s mother Elizabeth died from typhus, a disease rife in industrial British cities at the time and epidemic in Dundee during that particular year. The records suggest that Kenneth resigned his post in the excise and took the family back to the Black Isle. In the 1851 census he is listed as living at the family home of Flowerburn Mains, Rosemarkie, with his widowed mother, his brother David and sister-in-law Janet, their five children and a nephew. There is no sign of Kenneth’s own children.
Mary told the story to her grandson James Carmichael Watson as follows:
On her mother’s death she found a new home. Her people, like many others in the district, were of the Scottish Episcopal Church, and her mother’s sister, Anne Fraser, was the wife of the Rev. Arthur Ranken [(1806–86)], priest of Old Deer and later Dean of the united Dioceses of Aberdeen and Orkney. She became for the time an adopted child of Dean Ranken’s house, and went with his daughters to the College for Girls established at Crieff by Canon Alexander Lendrum, the Episcopal clergyman there – a school co-eval with Trinity College, Glen Almond, and similar to it in purpose, but not now in existence. [CG iv, xli]
It may well have been the case that Mary did go to school with the Rev. Ranken’s only daughter Anna Elizabeth (1834–64). This must have been during the late forties, for in the 1851 census Mary MacBean is recorded as the servant of William Campbell, innkeeper, living at Shore Place, Rosemarkie, near her father and grandmother. Although her siblings have not been traced in this census, it appears that her sister Anne died on 23 March 1853 at Fortrose. Her brother John probably did not survive childhood.
In 1861 Kenneth MacBean is recorded as an auctioneer, still living in the household of his brother David in Flowerburn Mains, Rosemarkie. Ten years later, the family seem to have vanished. We do not know what happened to Mary’s resourceful but restless father, although she did tell her grandson that he was still alive at the time of her marriage in 1868. A Kenneth MacBean of the right age is recorded as having died in the State of Victoria, Australia, in 1873. Mary’s second son, born on the 31 March 1872, was named Eoghan Kenneth Carmichael.
References:
Carmina Gadelica iv, p. xli.
David M. Bertie, Scottish Episcopal Clergy (Edinburgh: T & T Clark, 2000), pp. 410–11.

Image:
Rosemarkie in the Black Isle
at 16:25