The Ancestors of the Duke of Tarentum 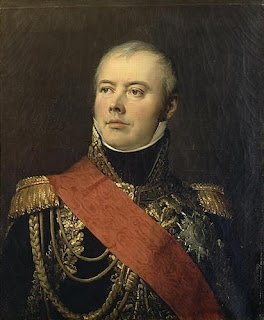 Interspersed among notes about the traditions of Argyll, Alexander Carmichael managed to collect some genealogical information regarding the MacEachen ancestors of the Duke of Tarentum. From whom got this family snippet he does not, unfortunately, say but it would appear that it was probably a tradition bearer from South Uist. Two patronymics of Neil MacEachen are given and their connection with Ronald of Arisaig and with Howbeg and Marshal MacDonald. One of these Neil MacEachen’s (later MacDonald) was the father of the Duke of Tarentum, otherwise known as Jacques Étienne MacDonald (1765–1840). His 1825 visit to his ancestral lands in South Uist has already been the subject of a pervious blog. The change of the family name to MacDonald by Alasdair Mòr while the others remained MacEachen is noted. It also appears that Alexander Mòr Howbig, or Alasdair Mòr Tobha Bhig (fl. 1800), had four daughters along with several illegitimate daughters, something that was not particularly unusual as this time.
Maceachains
(1) Neill Maceachain the son
of Hector son John son Hector
son of John son of Alexander son
of John ic Raoil, from Arasaig
– the first from Arasaig to How
beag.
(2) Neill Maceachan son
of Alexander son of John son
of Ranald from Arasaig.
Alexander father of
Neill father
of the Marshal had Neill
Ranald Howbeag. He is the
first called of Howbeg.
Raol had Alexander
who was called Alexander
Mor Howbig. This Alastair
had daughters (4).
and several illegitimate daughters.
Alexander Mor called himself
Macdonald prob[ably] after his cousin
the Marshal – all the others
kept to Maceachains.
Neil, Ranald, John & Angus
Ranald being the father of Alas
tair Mor – the father of the Marshall.
Raoil Howbeg this Raol being
the first called of Howbeag
Raoil had no son except Alastair
Mor.