Taken by the Fairy Host

A number of fairy traditions talk of the fairies kidnapping infants – these are the changeling stories that are fairly common – or of the fairies helping with the harvest and demanding more work, or, of course, the fairy lover. Even though they are perceived to be familiar, the fairy folk are considered to be amoral: they can either be kind or malevolent as the situation dictates. This short anecdote hails from Barra: Carmichael either recorded it from Alexander MacNeil, Alasdair mac Ruairidh Bhàin  (c. 1787–1881) from Kentangaval, or John Cameron (1805–1889) of Borve, over a two day period from 24th to the 25th September 1872. This notebook (CW90) consists of seventy-two folios. Seeing as it only contains these two dates, Carmichael must have been extraordinarily busy over these two recording sessions. 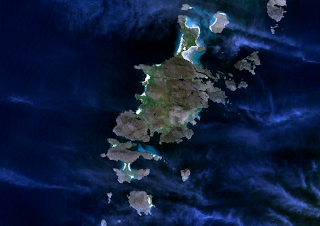 
Interestingly enough, Carmichael noted this about the ‘Sluagh’: Host, the spirits of the dead. Tha an sluagh a’ tighinn ’s a’ falbh, is marbh gun bhith beò, the ‘host’ comes and goes, dead and not alive. Such a definition makes a connection between the fairy folk and the dead. In addition to this short anecdote, Carmichael recorded Carraig nan Al (‘The Rock of Rocks’) from John Cameron. Carmichael also took down material from Alexander MacNeil’s wife Mary MacDonald, and from his daughter, Marion MacNeil, Mór nighean Alasdair mhic Ruairidh Bhàin, one of the earliest recordings of Craobh nan Ubhal (‘The Apple Tree’). By all appearances, MacNeil was a renowned tradition bearer for he was also recorded by John Francis Campbell of Islay and Hector MacLean. Carmichael, in a brief biographical note, provides the following snippet:
Mr Iain Campbell of Islay and, for him, the distinguished scholar Mr Hector Maclean, Islay, took down many tales from this reciter. I wrote down many more, but all three of us made little impression upon the old man’s abundant lore. I noted from him the names and characters of several score of long heroic tales, any or all of which he was ready to dictate to me. Amongst them was a very long, complete and wondrously fine version of Deirdire. Alexander Macneil said that the version of this tale which I had already taken down from his brother Iain Donn was only a fragment. Yet this fragment of the story of Deirdire has been pronounced by critics equal to any ancient or modern classic.
Perhaps there was some sibling rivalry going on between the two brothers but it remains a bit of a mystery why Carmichael did not record a ‘superior’ version of Deirdire when the opportunity knocked, even if this was only from the say-so of the tradition bearer himself.
References:
CW90, fo. 58v.
Carmina Gadelica i, pp. 42–43; ii, p. 381; v. pp. 3, 23, 323; vi. p. 128.
Macneil, Calum, ‘Carmichael in Barra’ in Domhnall Uilleam Stiùbhart (ed.), The Life & Legacy of Alexander Carmichael (Ness: The Islands Books Trust, 2008), pp. 44–57.
Image: Satellite Image of the Isle of Barra
at 12:01