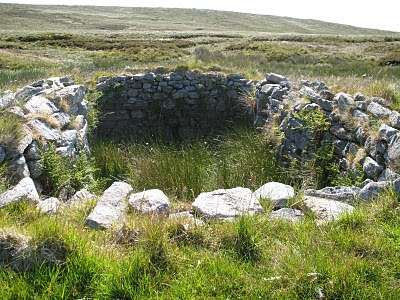 The mythological nature of vampires is a common theme throughout world folklore and, of course, Gaelic tradition is not an exception to this as it is imbued with many such riches. The following story was recorded by Alexander Carmichael probably from Duncan MacDonald aged 86 on the 28th March, 1871. We have previously met Duncan MacDonald or Donnchadh mac an Tàilleir, as he was the grandfather of the young prodigy (Donald MacDonald), and also of his name-sake Duncan MacDonald (1882–1954), one of the best Uist storytellers to be recorded by Calum Maclean.
Airi[gh]-na h-aon-oi[dh]che. A man MacPhie
lived in Benbecula & he had a dog & the
dog grew up a large animal & he never
barked. Ev[er]y per[son] was expressing a sur
prise that the dog was never barking
but MacPhie would only say never mind
the black dog’s day’s is not come yet. Coma
leibh tha là choin dui[gh] gun tighinn
fha[tha]st So time passed on & MacPhie
who was known as MacPhie of the
black dog, Mac a Phi a choin
duigh – built an airi[gh] shamhrai[dh]
out south of Staireval. When fin[ish]ed
he & his da chomhalta dhiag men
(some say women) went to the airi[gh]
They all lay down each in his bed
& each said that he wished he had
now his leannan with him Don e
don e bad bad ^[supra: have you wished] said MacPhie to have
bro[ught] the upon us & he flew out of the airi[dh] to the
utter astonismhment of this coaltun & the
[underlined: cu-dugh] after him. He had hardly got
out when twelve witches in the form
of women but with goib (beaks)
chnamha flew in upon his coalt[un]
& another went after him. He set ([underlined: stuig e])
his cu du[gh] at her & he himself flew
home. He request[ed] 4 boynes [del: miasrach]
(miasraichean) bain[n]e to be set outside
the ^[supra: house] door to be there on the arrival of the
cu du[gh]. This was done & aft[er] a while the
dog came He flew at the milk & [del: licked
licked] lapped (làp) [del: e su] up the 3 of
the boynes & on the fourth burst. He
was raving (mad) ([underlined: conàdh]) [underlined: conà thuil]
(raving flood) & not a hair left upon
him. Early in the morn[in]g people rushed
to Airi[dh]-na h-aon-oi[dh]che to asc[er]t[ain] the fate
of MacPhies 12 co-altun & found there were
12 stack[ed] dead some say with their
throat cut & drained of the blood &
others say with not a wound but the wounds
the gob-chnamha the bone-beacked
[in]flicted upon them & not a drop of blood
left in them The airi[gh] was abandon[ed]
& never more used & so the name.


In this particular version of the tale MacPhee’s Black Dog has been added, perhaps because this gave the story more pedigree! An excellent version of this tale was edited and published in 1883 by the Rev. John Gregorson Campbell (1836–1891) taken down from the recitation of Donald Cameron, from Ruag, Tiree. But the tale itself without this addition can and does stand by itself and very similar stories have been collected as far afield as Lochaber, Wester Ross as well as the isle of Lewis. As with the above story each place is grounded in the local area in order to not only to give credence to the tale itself but also must have been used to good advantage by the storyteller to add that little bit of spice to an engaging narrative. A similar version of this was collected by Calum Maclean in 1948 from Angus Barrach MacMillan (1874–1954) from Griminish in Benbecula suggesting that it was a fairly well known story in the Uists and doubtless elsewhere. A similar story, or folk etymology, seems to be connected each time the place-name Àirigh na h-Aon Oidhche (‘The One Night Sheiling’) appears (and not that uncommonly) throughout the Highlands and Islands.
References:
CW119, fos. 45v-46r