A Description of a Baptismal Font 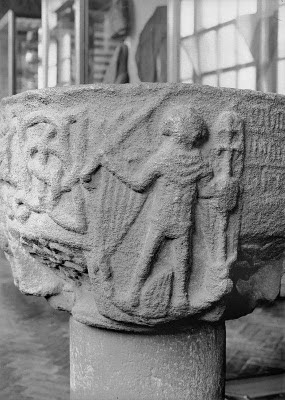 Alexander Carmichael took a great interest in material culture, particularly archaeological remains and objects that had either a religious function or resonance. Book-ended, as it were, between two fairly long Fenian narratives, there appears a fairly detailed description, probably written around 1866, of a baptismal font as follows:

Font.
Sav[iour] and cross one side. On each side
of this beautiful celtic basketwork. On
another side Virgin and child. Another side
a bishop in full pontifical and
crozier – [del: old font old] and mitre
vestments. Holding crozier in left
hand. Another side A Knig[del: h]t in
kilt and full armour. In right hand
a sword and under sword a shield
in left is a cross. A palm like a
moss rose. Some plant often on
tomb stones. Another rose some
what different from the other. Time of
the Crusades. Inscriptions on two
sides and ro[u]nd the rim. Illigible now
Chirst cross legged and and hands
at right a[n]gles with the body


Unusually Carmichael was rather lax here and he makes no mention of the actual place that he saw this baptismal font. At first, the context is unclear whether he is describing the font from actually seeing it and taking down notes as he made observations; whether he is describing the font from a book illustration; or, indeed, whether he is writing down someone’s recollections of actually seeing the font. It seems, though, that as the detail is so rich that a tentative identification can be made for the description seems to match rather well with a baptismal font from Skye which is called St. Michael’s Font at Eynort in one of St Maelrubha’s Churches. The image of St Michael would seem to fit the description that Carmichael gave as well as fitting in with the rest of the details. There are two churches along the coast at a place called Borline, Eynort, Skye. The larger church is eighteenth-century, the smaller is undated and the baptismal font was discovered here and is thought to date to around the sixteenth-century. There the matter would have rested if it had not been for the fact that Carmichael had written about it and gives an even more precise description of the font which relegates the above description to note-taking perhaps with a view to publication. Interestingly enough, the back-story of how the font came to be in Carmichael’s possession is also provided:


Many years ago, a crew of South Uist fishermen, while on their way to Glasgow with a cargo of fish, were driven into Lochaoineart, Skye. Upon the north-west side, and near the head of Lochaoineart, stand the church and churchyard of St Malrube, the former a roofless ruin, and the latter a deserted wild. Here the fishermen saw an old Font, and deeming it too sacred to be left with the heretic Protestants of Skye, resolved to bring it to their priest, the late Rev. James MacGrigor. They accordingly carried it to their boat, and, the weather moderating, resumed their voyage. But before reaching the island of Canna, the weather again became boisterous, and again forced them back to Lochaoineart. Attributing their misfortune to their removal of the font, a debate arose among the fishermen whether or not they should restore it to its original position; but the wind becoming fair, it was decided by a majority of the crew to make another attempt, which was done accordingly. But the weather again became stormy, so much so, that when south of the Small Isles, they were in imminent danger, and unanimously concluding that the elements were conspiring against them for removing the font, they agreed to return, and replace it. Much angry recrimination now took place. The minority, who were against sailing with the font a second time, abused the majority in no measured terms, and told them that this was what they predicted, and the majority blamed one another. The gale increased, and with it the superstitions fears of the fishermen. Consequently, they returned to Lochaoineart, and, with much care, replaced the font where they found it.
The fishermen reached Glasgow, and disposed of their cargo. On their return voyage, they again called at Lochaoineart. They still cherished the desire to bring the font to Mr MacGrigor, and they accordingly placed it again in their boat, and, after much misgiving, ventured across the Minch, landed at Iocar, and carried the font in triumph to Mr MacGrigor, at Aird-Choinnich. There it lay in a corner of the chapel till a few weeks ago, when it was sent me in a present by my friend, the Rev. Donald Macintosh, the late Mr MacGrigor’s successor.