Christ on the Cross 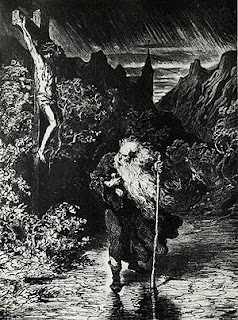 Alexander Carmichael, on one of his very last fieldwork trips, collecting around Ross-shire (between 1907 and 1909), found that he had in no way exhausted the sheer amount of folklore that still survived. It is more than likely that his son-in-law, Professor William James Watson (1865–1948), a born and bred Easter Ross-shire man himself, and who held the chair of Celtic at the University of Edinburgh, provided Carmichael with names and addresses of potential informants so that it would ease his collecting in an area that he had hardly been to previously far less than to have combed this extensive area of the Highlands for oral traditions. Out of the many from whom he recorded material was Catherine Maclean, a crofter, from Nàst/Naast, in Gairloch. Carmichael collected at least three charms and a prayer from her recitation (that were subsequently published in Carmina Gadelica iii and iv). She also told him a brief religious narrative showing that Carmichael was still very interested, even at this late period, in collecting anything relating to Christianity whether they be charms, prayers, invocations or even apocryphal legends.
Christ on the Cross
There was no bellows and the
bana-cheard blew the fire over
her sguird apron and the nails
for the cross were made. Then
C[hrist] said Bis tusa a siubhail
bho linnean na linnean agus
do sheors as do dheigh airson
do ghniomh agus chan fhaigh
thus fois oi[dh]che no tamh la[tha]

In brief, this is a very similar story to a medieval legend known as the Wandering Jew who was cursed by Christ to forever walk the earth until the Second Coming. According to the legend, while Christ was making his way to Golgotha where he would be later crucified, the Jew had taunted him and had thus irked divine retribution. It would appear that the legend originated around the thirteenth century and has since then made quite an impact on European literature, ranging from Geoffrey Chaucer’s fourteenth-century The Canterbury Tales to Charles Maturin’s Melmoth the Wanderer (1820). A more pertinent tradition is related by a correspondent in a brief unsigned note that appeared an issue of Gypsy Lore: 'I should be pleased to know if you have the tradition in the South [of Scotland], that the tinkers are descendants of the one who made the nails for the Cross, and are condemned to wander continually without rest.' Although it would appear that the correspondent received no answer this tradition was still alive and well in Ross-shire.