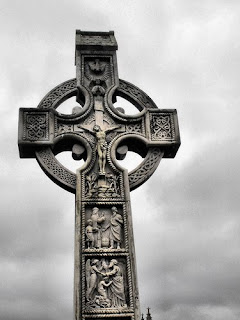 One of the main sources of oral traditions in the Uists was Ruaraidh Ruadh MacCuithein (‘Red-haired Roderick MacQueen’) who lived from around 1750 to 1830. He was a catechist which afforded him good reason to travel all around the Uists. A catechist was a layman who assisted the clergy by going about teaching the non-literate population the contents of the Catechism, and, once the religious education was over with, then it would be natural enough for the participants at such gatherings to relate songs and tales and, perhaps, even play instrumental music. It seems that whatever religious differences there may have been between a predominantly Protestant North Uist and a predominantly Catholic South Uist held but few barriers for it is remembered that many of the heroic tales known in Catholic South Uist could be traced back to the telling of this Protestant catechist, Ruaraidh Ruadh from North Uist. In a note about him it tells us that an informant’s source for a Fenian lay who ‘heard these duans from Ruairi Mac Cuinn who lived at Malacleit and who had a free piece of land there from the proprietor for his duans.’ An informant, Catherine MacQueen (c. 1799–1871) or Catrìona nic Lachlainn, the catechist’s niece, from Clachan a’ Ghluip, in North Uist, recorded a number of Fenian lays for Alexander Carmichael on 5 October 1865. Carmichael wrote at the time: ‘Her people were noted old-lorists. Her uncle, Ruaraidh Ruadh Maccuithean, was story-teller to Lord Macdonald, from whom he had free lands for his sevices.’ These included a version of Am Bròn Binn, entitled in the notebook as Aisling Righ Breatinn as well as the popular Laoidh Fraoich:

Learnt this from Ruairi Rua[dh]
Ceisteir sa cheanna Tuath
[Do[mh]nallach] more than 50 years
People came from Edin[burgh] for
seanachas na Feinne and
this was the best from whom
this was best got in the High-
lands of Scotland.
She added further that she could also recite Duan an Deirg also learnt from her uncle, which Carmichael later transcribed on 4 May 1869, who had also lived at Scolpaig, on the north-western shore of North Uist, only a short distance from Malacleit:

He was a catechist and used to go about
from house to house. He had eighteen
books written about the Feinne which his
son who turned a F[ree] C[hurch] burnt.

It is somewhat ironic that such religious short-sightedness shown by a convert to the Free Church of Scotland should destroy such a treasure of Gaelic oral traditions collected by a presumably devout catechist. One can only imagine Carmichael’s expression when he heard about such a lamentable loss.