Objects in Focus: Spindle and Whorls

Continuing on from the carding combs, this blog will highlight two objects used in the next step towards producing cloth: the spindle and whorl. There are examples of both items in the Carmichael collection housed at the West Highland Museum. 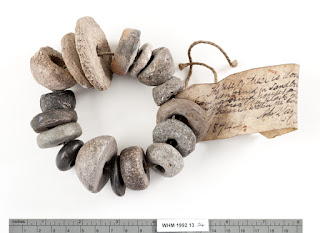 Once the wool was combed through it was spun into a continuous piece of yarn. I. F. Grant provides a brief account of the process, involving a spindle and whorl, in Highland Folk Ways:

The process was a simple one. The thread was twisted and lengthened by the dangling spindle which was sufficiently weighted to spin when it was given a twirl by the finger and thumb. 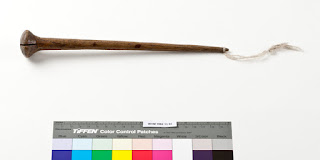 Towards the end of the 18th century the spinning wheel came to replace this spindle and whorl method, but this is not to say that the hand-method fell out of practice.

The whorls also served as amulets and were commonly referred to as clachan nathrach meaning serpent stones. They were used in the same method as flint arrowheads: dipped in water to be given to an ailing animal or to wash a wound (snake-bite), or rubbed on the wound directly. 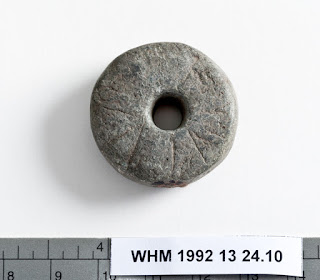 Captain Thomas writes about these stones in the Proceedings from the Society of Antiquaries of Scotland:

Clach-nathrach, or snake-stone, 1 inch in diameter, Lewis.—This stone is said to be formed by the association of twelve snakes, and the hole is where the snake or snakes have passed through. I am not sure whether the stone is made from the slime agglutinising the sand and earth, or whether the stone exudes from the reptiles. When the cattle are bitten by the snakes, the snake-stone is put into water, with which the affected part is washed, and it is cured forthwith. So much for the legend; and I believe one of these charms has been used quite lately; but not the least curious circumstance connected with this superstition, is the fact that there are no venomous snakes in Lewis. The blind-worm is not uncommon, but it is quite innocuous. However, there is a full belief that if a sheep, for instance, were to lie down upon one of them, the wool and skin would both peel off; and the man is probably alive who trod upon a righinn,—the local name for the blind-worm (from a tradition that it is a princess metamorphosed),—and in consequence the skin came off the sole of his foot.

Since my return to Edinburgh, I learn that these snake-stones are a part of the gear of the distaff; and it is strange that their original use should be quite unknown in Harris and Lewis, although the distaff is there in common use.

The use of these is doubtful. They have been found in sandbanks graves underground houses and [-] and in various other places throughout the Long Island within the last ten years. Alex. A Carmichael, Creagorry, 1874”