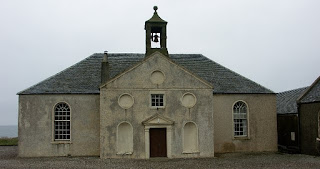 In the last blog we investigated Alexander Carmichael’s apparently one-off visit to the Island of Gigha on 9 June 1887, during his journey back from Islay to Edinburgh. He seems to have spent the night on the mainland, perhaps at the inn in Tayinloan, just north of Killean. His brief notes are as follows:

Carmichael travelled south to the manse at Muasdale to pay a visit to the local minister, the Rev. Donald John MacDonald (1855–1930) of Killean and Kilchenzie. Carmichael didn’t meet him that day, but it looks as if he did a few years later. The Rev. MacDonald is the subject of today’s blog.

Alexander Carmichael must have known the young MacDonald when he was a schoolboy in Uist: the minister’s father was Norman MacDonald, an important island tacksman, farming both Baile nan Cailleach or Nunton in Benbecula and Bhàlaigh in North Uist, while his mother Jessie – at the manse when Carmichael visited – was the daughter of the Rev. Roderick Maclean (1772–1854) of South Uist. Jessie MacDonald née Maclean (1822–1924) would die a centenarian in New South Wales. The ‘Miss Colville’ who was visiting the manse along with her brother was probably none other than Margaret Colvill (1859–1936), the daughter of Robert Colvill, Belgrove House, Campbeltown, proprietor of the Albyn Distillery there. Two years later, on 12 June 1889, she and the Rev. D. J. MacDonald would marry.

Even though Alexander Carmichael and the Rev. Donald John MacDonald didn’t meet in Kintyre, there seems no doubt that they came across each other a few years later. On 30 January 1891, both men were present at the first annual gathering of the Clan Macdonald Society, held at St Andrew (Berkeley) Hall in Glasgow. ‘The attendance’, reported the Scotsman, ‘was far in excess of the accommodation provided.’

It’s tempting to think that during the evening Carmichael may well have badgered the minister into carrying out his own researches into west Kintyre. The following year MacDonald gave a lecture on the history of his parish, subsequently published in the Campbeltown Courier, then as a stand-alone booklet. The Annals of the Church and Parish of Killean remains a basic, if brief, text for the history of Killean and Kilchenzie. Its success must have encouraged the minister to broaden his investigations into archaeology and folklore: on 30 January 1895 he delivered a paper to the Gaelic Society of Inverness, printed the following year as ‘Jottings – Legendary, Antiquarian, and Topographical – from West Kintyre’, TGSI xx (1894–6), 54–65.

This was not the only paper MacDonald prepared for the Gaelic Society of Inverness. In February 1908 a brief and intriguing article on ‘West Kintyre Field Names’ was read to the society by Carmichael’s son-in-law William J. Watson. Doubtless the great place-name expert had a hand in the version which appeared in print three years later [TGSI, xxvii (1908–11), 31–40]. MacDonald was also the transcriber of portions of the now lost manuscript diaries of Rev Murdoch MacDonald (1696–1763) – these transcriptions are preserved in the National Library of Scotland as Acc.11529.

The Rev. MacDonald was not just a local antiquarian. We’ll end this blog by having a look at a heated intervention he made in an episode in the long struggle for Gaelic to be taught as a recognised subject in Highland schools.

On Saturday 6 March 1897 a sizeable deputation under the Marquis of Lorne, including 34 Highland-linked organisations (among them eight clan societies – changed days!) and five MPs, waited upon the Conservative Secretary for Scotland ‘at the Scotch Office’ in London ‘to urge upon him the necessity for more systematic teaching of Gaelic in Schools in the Highlands’. The deputation requested that a grant for Gaelic be distributed as for other school subjects, that encouragement and support be given to bilingual instruction in the Highlands, and that Gaelic-speaking inspectors be hired, thus putting the language ‘in the same position as had already been conceded to Welsh in Wales and to French in the Channel Islands.’ In his discouraging reply Lord Balfour alleged lack of demand from parents and School Boards, and lack of need, stating further:

It seems to me that the more you prove that the Gaelic language is the language of the scholars [i.e. schoolchildren] the less you need to teach it as in itself a subject of study. If, on the other hand, it is put to us that it will disappear unless it is taught, then my answer is that that goes far to prove that it will not be the natural tongue of the scholars, and that it would be beyond the function of a Government Department artificially to keep it up. [Glasgow Herald, 8 March 1897]

Balfour’s rather sleekit ministerial logic, and his bald statement that there was no Gaelic literature to teach children in the language apart from the Bible, provoked the irate Rev. MacDonald to dash off what the Celtic Monthly praised as a ‘scathing letter’:

Gaelic-speaking children should be instructed in Gaelic because it is their natural language. Suppose we vary the terms, and say ‘the more you prove that English is the language of the scholar the less you need to teach it as in itself an object of study.’ … [H]e would be a poor dialectician who would suffer himself to be put on either the one horn or the other of Lord Balfour’s dilemma. …

MacDonald ended the letter by returning to his childhood in Benbecula:

I attended school in one of the islands of the Outer Hebrides, in which people read [English] fluently indeed, but what they did read might have been Greek for all they understood of it. Had they been taught to read their own language, and this made the medium of instruction, I am sure it would have been otherwise, and they would have profited immeasurably more than they did by their education. And instead of objecting to Gaelic being spoken in school or playground the conditions under which the children were taught were a source of constant complaint on the part of their parents. Highlanders value and even love the Saxon tongue. But that is no reason why they should neglect a language having associations, historical and mental, of so close a nature for them, or suffer it to sink into decay and become extinct. Let all interested persevere in their demands, and none can deny them. [Glasgow Herald, 11 March 1897]

After over 45 years in the pulpit, the Rev. Donald John MacDonald of Killean and Kilchenzie left his charge on 1 March 1926. He died at Muasdale on Saturday 27 December 1930.