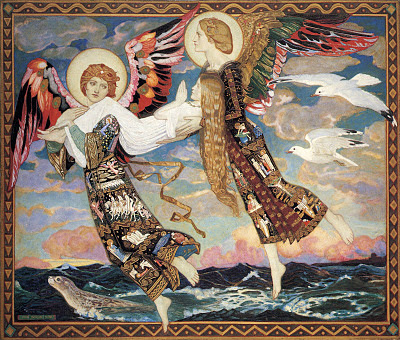 As muime Dhè or the fostermother of Christ, St Bride or Bridget was and is a firm favourite saint of Gaels in both and . Her feast, 1 February, one of the quarter-days in the Gaelic calendar, is a celebration of the first day of spring. In CW7 there is a note concerning a custom on St Bride’s day, Latha Fhèill Brìghde:

On La-Fheil-Bride a person is sent

was sent [sic] to the strand to bring home a partan [crab].

The partan was placed on the middle of the

house. If the partan went towards the

upper end of the house, it indicated the family

went toward the door it indicated that they were

Those under St Bride’s protection included midwives, newborn babies, cattle, poultry and infants, and she was regularly called upon when women were in labour:

The dandelion or beàrnan-Brìde was used as a cure for a wide range of ailments, in particular for stomach problems. The root was traditionally boiled but occasionally the leaves could be eaten. A cure for blood-flux is noted in CW87:

The Bearnan-Brìde = [later: Dandelion] in a lump
of butter is given to cattle and sheep ill with blood-flux.

The dandelion is called ‘bearnan Bride,’ the little notched of Bride, in allusion to the serrated edge of the petal. The linnet is called ‘bigein Bride,’ little bird of Bride. In Lismore the oyster-catcher is called ‘gille Bride,’ page of Bride:-

In Uist the oyster-catcher is called ‘Bridein,’ bird of Bride.

The best-known custom in associated with St Bride, or St Brigid as she is known, is the making of the cros Bríde or Brigid’s cross to protect the house from evil. This tradition, however, does not seem to have been known in .