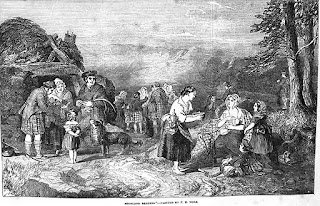 The series of scrapbooks from CW537 to CW576, filled with newspaper cuttings from newspapers published across the Highlands and beyond, has been rather neglected by the Carmichael Watson Project over the years. A recent query from Dr Jake King of Ainmean-àite na h-Alba/Gaelic Place-Names of Scotland sent us back to the strongroom shelves to have a second look at what is a wonderful resource. Local newspaper columns at the end of the nineteenth century, buzzing with letters and articles, served as a clearing-house for discussion about all kinds of items connected with Highland literature, lore, and history. The great Gaelic scholars of the time kept a close eye on Highland newspapers for any material of interest, and it looks as if we have in the CW collection examples of the cuttings books of Alexander Macbain, the Rev. Charles M. Robertson, Prof. William J. Watson, and Henry Whyte (‘Fionn’).

We look forward to the digitisation of all newspapers in the British Library collection currently being carried out. When – eventually – these are accessible online, it will allow those of us with an interest in Highland history and culture to investigate and assess a still sorely underused level of literature, an ephemeral and lively medium half-way between manuscripts and printed books. We worry, though, that some newspapers may be lost forever: one grievous loss, for example, appears to be the West Coast edition of the Highland News, the main outlet for Gaelic material in that paper. Only the Inverness edition, fascinating though it is, has been archived for posterity.

Here’s one example out of thousands preserved in the cuttings books: a (very lightly edited) Highland Reaper’s Song, transcribed from CW558, p. 34, a cutting from the Northern Chronicle, 4 March 1885:


THE HIGHLAND REAPER’S SONG
SIR, – Reading to-day the last volume issued of the Life of Thomas Carlyle, I was reminded, by a passage quoted (p. 325) from a letter to his wife, of some fragments of a song – of no great merit, certainly – which I used to hear sung more than sixty years ago by Highland shearers on their return from the ‘Loudies’ (Lothians). Their composition was ascribed to the ‘Bard Conanach.’ I am sure there must be a good many more verses than those which I send you, but I can recall no more – and no great matter! – Yours, &c. OCTOGENARIAN.

Port na Bànrigh is of course Queensferry, while the hungry boguis are none other than (bed)bugs. The reference to Carlyle’s biography is to rather biased observations about Irish and Highland reapers in James Anthony Froude’s Thomas Carlyle: A History of his Life in London (London, 1884), volume i, p. 325. We don’t (yet) know who the Northern Chronicle’s ‘Octogenarian’ correspondent was. Tomnafeille, however, might be Tomnafeil, now anglicised as Markethill, in Fort Augustus – though there is another possible candidate in Markethill near Dunbeath.

In his paper ‘The Gaelic Incantations and Charms of the Hebrides’, published in the Transactions of the Gaelic Society of Inverness, xviii (1891–2), pp. 157–8 [reprinted in booklet form as Gaelic Incantations: Charms and Blessings of the Hebrides (Inverness: Northern Counties Newspaper and Publishing Company, 1895), pp. 61–2], William Mackenzie prints a blood staunching charm he had learnt from:

Duncan Campbell, an old Strathconan man, now resident in Beauly. He learnt it from a sister of Donald MacDonald, the Bard Conanach. The Bard, it appears, was celebrated for his Charms and Incantations, and taught the present one to his sister.

In an accompanying footnote, Mackenzie prints the following anecdote:

In local tradition he is represented as having been particularly successful both in letting and in staunching blood. On one occasion, while at the harvest in the Lothians, he lodged with a weaver, who was also a noted phlebotomist. A full-blooded damsel of the district called on the weaver in order that he might let her blood. He tried with all his skill, but the blood would not come. Whereupon the Bard took the damsel in hand, and, taking her by the small of the wrist, squeezed an artery, with the result that the blood squirted in the weaver’s face. The weaver desired the Bard to show him his method. The Bard responded in verse:–

Obviously, for somebody such as the bard who made his living from sharp blades – and, perhaps, from sharpening blades at the reaping – the skill of staunching blood would be very useful, and maybe rather lucrative as well.