The Laird of Coll's Powder Horn 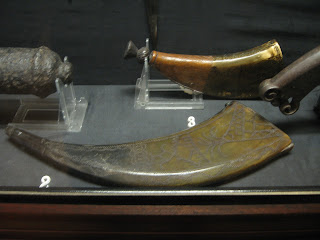 As the Carmichael Watson Project moves into a new, Leverhulme Trust-funded phase, we’re starting to investigate Alexander Carmichael’s fascinating personal collection of objects, now looked after in the West Highland Museum in Fort William. One particularly interesting item may be connected with an unusual waulking song Carmichael recorded in Mingulay.

As discussed in a blog earlier this year, Alexander Carmichael ‘discovered’ waulking songs while on a visit to the little island of Mingulay/Miughalaigh, at the southern tip of the Outer Hebrides, on 8 August 1867. Carmichael was back in Mingulay on 22 May 1869, doing intensive song-recording from his friend Roderick MacNeil (c. 1790–1875), Ruairidh an Rùma, as well as from two local women, Mary MacDonald (c. 1837–1915) and someone he later describes as ‘Mary wife of Angus Campbell’. We’ve been unable to trace her, but there’s a possibility Carmichael might have meant Marion (b. c. 1841), wife of John Campbell, who appears on the island in the 1871 census. The two women sang their songs to the very appreciative collector not at the waulking board, but while woolworking – ‘one carding, the other spinning’ – one singing the lines and the other the chorus.]

Among the songs Carmichael recorded is one with the following impassioned lines:

My love the Laird of Coll
A shame that I wasn’t pregnant for you
The load of my two breasts full in my chest
Even though I’d only give you a little heap
Without fame, strength, or body,
Just two eyes above a brow.
And the little baby lying behind him
[?With] the pistol and the ‘aoraic fhudair’.

Given the feelings they express, it’s hardly surprising that these lines don’t appear to have been given to any other song collector. But what’s the ‘aoraic fhudair’ in the last line?

The context gives the game away: it’s what would be written in standard Gaelic ‘adharc fhùdair’, a powder horn made out of cow horn, an object used to carry gunpowder without any danger of sparks or soaking. The heyday of the often elaborately decorated powder horn was the eighteenth century, the era of muskets, before the advent of the powder cartridge. By Carmichael’s time the powder horn was quite obsolete apart from occasional use in full ceremonial Highland dress – definitely not a common sight in the Outer Hebrides! It’s hardly surprising, then, that there are few if any other mentions of an ‘adharc fhùdair’ in the corpus of Gaelic waulking songs.

We originally thought that the word ‘aoraic’ which Carmichael wrote down meant that either he or the singer didn’t understand the reference to ‘adharc’ or horn. A brief chat with Professor Donald Meek from Tiree, however, put us right. Across much of the Scottish Gàidhealtachd, ‘adharachd’ is a perfectly acceptable dialect alternative to ‘adharc’. Maybe this is how Carmichael heard it when he was writing it down, or maybe the word was preserved like that in the song, testimony to its Argyllshire origins.

What of the item in Carmichael’s collection? As you’ll have guessed, it’s a powder horn, one of four he acquired. This one is said to have ‘belonged to MacLean of Coll’ – that is, the Laird of Coll, Tighearna Cholla. But did it really? Alexander Carmichael certainly visited the Island of Coll in September 1887, and knew a number of people with Coll connections, so the provenance of our powder horn may be genuine.

On the other hand, might this be a sly joke by the original donor, perhaps in reply to Carmichael’s question, ‘Who owned it?’ The object was a powder horn, an ‘adharc fhùdair’ (or an ‘adharachd fhùdair’). There was a waulking song praising the Laird of Coll where his powder horn is mentioned. ‘So it must have belonged to Tighearna Cholla.’ The story of the powder horn and the waulking song may demonstrate how closely bound up oral tradition and material culture might be. On the other hand, this may just be yet another example of a scholar making too much out of very slender connections. There may be a much simpler explanation lurking somewhere still in Alexander Carmichael’s archive!

Image: A not very clear picture of Carmichael’s powder horn
at 16:11