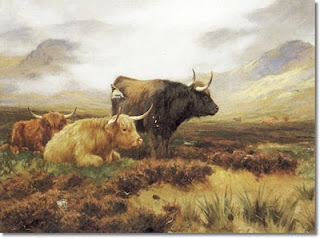 Over the past week a number of emails have arrived in the Carmichael Watson inbox with the rather alarming heading ‘urine charms’. The reason for the sudden spate of interest (to coin a phrase) is a series of threads on the online discussion group Old-Irish-L investigating three Old Irish charms in the illuminated manuscript known as the Stowe Missal. We thought it might be of interest to trace charms for what probably were similar ailments, as gathered by Alexander Carmichael when he was living in Uist between 1864 and 1882. The following blogs, then, will offer you all you’ll ever need (or probably want) to know about the mysterious world of red water charms.

The primary purpose of these charms is to cure cattle of a disease usually referred to in the islands as bun-dearg. The term is obscure, but if it derives from ‘bùrn dearg’, it is directly related to its English equivalent, ‘red water’. Although nowadays ‘red water disease’ refers to a serious and often potentially lethal ailment caused by the parasite Clostridium hemolyticum in the kidneys, in Carmichael’s late nineteenth-century Hebridean world the term would have been applied to any potentially lethal disease in which one of the principal symptoms was red urine. In a society where wealth was calculated by the numbers of cows owned, the loss of a single beast could have catastrophic effects, especially on poorer households. Here is Alexander Carmichael’s folk explanation of the bun-dearg in his ‘vocabulary notes’ at the end of the second volume of Carmina Gadelica:

Bun-dearg, red swelling; ‘burn dearg,’  red water; ‘galar dearg,’ red disease; ‘earna dhearg,’ ‘ earnach dhearg,’ red murrain; ‘earna dhubh,’ ‘earnach dhubh,’ black murrain. The red and the black murrain are two stages of this disease, which is produced by several causes. On the mainland it is generally caused by the cattle eating the young leaves of shrubs and trees, especially the bog myrtle, the alder, and the birch, and by drinking water impregnated with them. In the Isles the disease is caused chiefly by eating the sundew (drosera rotundofolia). Wherever sundew prevails red pleura is common. A place in South Uist is known as ‘Bogach na fala,’ marsh of blood, from the prevalence of sundew and its deadly effects. (CG ii, 238)

The first of Carmichael’s red water charms was gathered from Ann MacIsaac née Maclellan (c. 1808–1883), Ceann Langabhat, an t-Ìochdar, South Uist. Ann was the daughter of John Maclellan, farmer in Bòrnais, and his wife Christian Macmillan; she was probably from the same stock as the celebrated storyteller Angus MacLellan (1879–1949) from Loch Aoineort. In 1847 Ann married Hector MacIsaac, one of the principal seanchaidhean or storytellers in South Uist. Hector’s stories were first recorded by Hector Maclean in 1859 as part of John Francis Campbell’s Popular Tales of the West Highlands project. Alexander Carmichael clearly hit it off with the couple; perhaps they even regarded the young bachelor as the son they never had.

As we shall see in a later blog, Ann MacIsaac may have been the first person from whom Alexander Carmichael recorded charms and incantations, the genre with which he would go on to make his reputation in the first two volumes of Carmina Gadelica, published in 1900. Among the six charms she apparently gave to him on 16 October 1867 was Eòlas a’ Bhun-deirg, the Red Water Charm. Here is his later transcription:

Ruith eir d’ fhual
Stad eir d’ fhuil.
Great sea, red cascade,
May your urine flow,
May your blood stop.
Note: this is thrice repeated over the sick animal afflicted with ‘Red water’. [CW87 fo.18v]
Liquid imagery of sea, river, and waterfall, together with commands to flow or stop, are probably universal in all European charms concerning blood and urine, whether they’re intended against red water or for staunching wounds.

There was, however, one major problem with Ann MacIsaac's charm for Alexander Carmichael when he was compiling and creating Carmina Gadelica. It was far too short to be printed as a stand-alone item. In a subsequent blog we shall take a look at what might have been his solution.
at 22:56