Fulling the Cloth in Mingulay 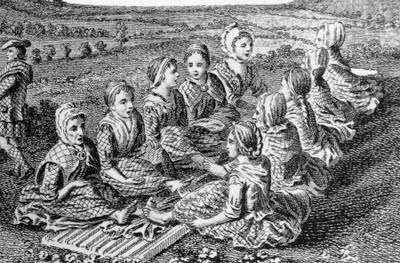 Two years in a row saw Alexander Carmichael visit the remote island of Mingulay, lying some dozen miles south of Barra. On 8 August 1867, he had the opportunity to get to know some of the islanders, especially Roderick MacNeil or Ruairidh an Rùma, mentioned previously in this blog. Such an event as a luadhadh or waulking the cloth may have been something rather unusual for Carmichael to have witnessed as it was in the main the preserve of women. Carmichael did not show any reserve and what may be taken as something he had not previously seen clearly piqued his interest. His jottings help by way of providing a context for the social setting of waulking or fulling of cloth:
Fulling at Miulay. Heard a fulling song
sung while pas[sing] a hut and went in. Found
six good looking comely girls waulking cloth
One sung the verses the rest the chorus
and all took their turn at this. All the
songs suited the body made in ful[ling] and all
to my ear wild weird and beautiful.
One was a fairy song and fairy like.
Measured the arms of two of the girls. Each
meas[ured] 11½ inches in circ[cumference] The rest seemed
to be gen[er]ally stout and yet they did not
seem to me to be any sup[erfluous] flesh about them.
The ful[ling] song com[mences] first slowly and ma[jestically]
and all keep time to this in their mov[ements].
Then it becomes ‘fast and fun till the
whole as by feel] a dif[ficulty] in rest[raining]
their prop[riety]. The cloth is sent round
with the sun. upon no ac[count] would they
attempt the con[verse]. The cleith luai[dh] is a
a plank a fair in[ch] thick 1½ bro[ad] & 10 f[eet] long.
It must have been tossed ab[out] in the At[lantic]
for a time for it is perfor[ated] all over by teredo
One of the songs sung was a comp[osition] one
made to [supra: the Stranger] all the rest sung the chorus.
I asked them to sing the fairy song again
They hesi[tated] and when I pressed them they
said that did they repeat a song twice
at a clei[th] luai[dh] the cloth would
become as thin as before and in[stantly] lose
all its col[our] and become pure white!
I did not then press.


Elsewhere in Carmina Gadelica, Carmichael writes thus about the different stages involved in waulking: ‘Five minor processes are involved in waulking. There is first the process of thickening the cloth; second the process of cleansing the cloth; third, the process of folding it; fourth, the process of giving it tension; and after these the rite of consecrating the cloth. All these processes are performed with the care of eye and deftness of hand come of ability and experience.’ He then continues with the aspect of rhythmic choral singing used to lighten the toil of the sheer hard work involved in fulling the cloth: ‘During the work the women sing lively, stirring, emphatic song. One sings a verse, all join in the chorus. The leader usually sits a the head of the waulking frame; if she is advanced in life she is not allowed to work, in which case she sits a few feet back and in line with the frame. The women keep time with their arms and feet.’
References:
CW114, fos. 62v–63r.
Carmina Gadelica, iv, pp. 88–89.
Image: Waulking the Cloth, Talisker, depicted by Moses Griffiths from Thomas Pennant’s Voyage to the Hebrides (1772).
at 15:56