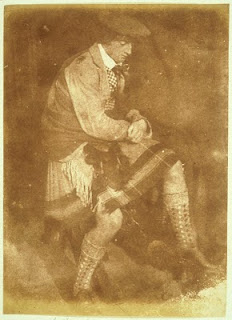 Alexander Carmichael was not adverse to collecting material about other collectors as the following rather amusing anecdote illustrates:
When Campbell of Islay had
Pool House at Poolewe John F
Campbell then just of age was
passing along the road when
people were carrying sea weed on
their back to the roadside. A hand
some young girl gazing at
the young man passing said
A Dhia nach robh thu posd agam!
Nan robh cha bhiodh tu fon chliabh
agam said he in as good Gaelic
as her own. The poor girl was
so taken aback at the unexpected
Gaelic that she threw the cre[e]l
from her ran home as fast
as her legs could carry her
nor would she move out of
the house or go near the place
while the Campbells came there.
“Cha ghluaiseadh brog no
bruithinn gu feamanadh tuilidh
i fad agus bha Tighearna Ile sin.”

Presumably the young lassie knew to whom she was making her remark but had not guessed at all that one of the Gaelic aristocracy could understand Gaelic never mind speak it. It was rather remarkable for John Francis Campbell’s father, Walter Frederick, made sure that his son would speak Gaelic for he was partially brought up by a Gaelic-speaking piper, and name-sake, John Campbell. John Francis, writing about his youth, states that: ‘from him I learned a good many useful arts. I learned to be hardy and healthy and I learned Gaelic. I learned…to take care of myself, and to talk to everybody who chose to talk with me.’ And so it proved on this occasion for the shock of the witty rejoinder hit home and the poor lassie probably never made such remarks to any strangers ever again.
References: CW 122, fol. 16r
National Library of Scotland, Lamplighter and Story-teller: John Francis Campbell of Islay, 1821–1885 (Edinburgh: National Library of Scotland, 1985)
Image: John Francis Campbell – Iain Òg Ìle, c. 1843
at 12:02