Carmichael, Catholicism and the Bard

Next Monday, 25 January 2010, Dr Domhnall Uilleam Stiùbhart, Senior Researcher on the project, will give a seminar to the Scottish Catholic Historical Association about Alexander Carmichael's extraordinarily demanding collecting work between 1865 and 1878 in the Catholic islands of Benbecula, South Uist, and Barra, then as now some of the richest areas for traditional folklore in western Europe.


Using his field notebooks, we can trace in fascinating detail how Carmichael went about gathering his store, as well as get to know some of his favourite interviewees. 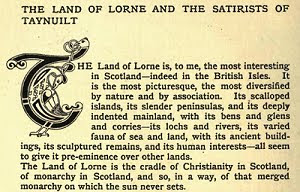 Dr Stiùbhart will also talk about how the Carmichael Watson project is progressing, and outline some of our plans for the future. Also, given that it will be Burns Night, Dr Stiùbhart will have to touch upon one of the more interesting conjectures made by Alexander Carmichael: Robert Burns' supposed descent from a poetically-gifted serial killer by the name of Walter Campbell who lived near Taynuilt.

All this and more at the Scottish Catholic Archives, 16 Drummond Place, Edinburgh EH3 6PL starting at 5.30pm. With refreshments!