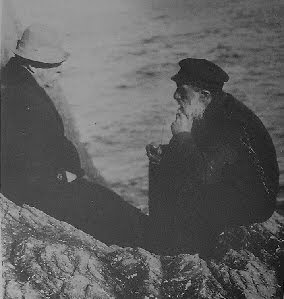 Who were the serious young couple whose marriage was described by Kenneth Campbell, schoolmaster on St Kilda in 1884–85? In the speech he delivered in December 1886 about his year on Hirt, Campbell says that he was present at two marriages while on the island: this tallies with official records. His description of them as ‘the young couple’ rules out the marriage celebrated on 27 April 1885 between the notorious ‘serial emigrant’ Ewen Gillies, then aged 59, and his second wife Rachel MacQueen (aged 31 according to the certificate, although in fact 33), who were shortly to leave the island for Canada.

This leaves us with the other marriage held when Campbell was on the island, which took place on 5 August 1884. The bridegroom on this occasion was none other than Finlay MacQueen (1862–1941), the nephew of Rachel MacQueen. By the time of the evacuation in 1930 MacQueen, by then a widower, was the recognised patriarch and best cragsman of the island. Perhaps rather unexpectedly from the glimpse we have of the solemn young man, MacQueen was also the (admittedly often rather cantankerous) guardian of St Kildan traditions.

Finlay’s bride was the slightly older Mary Gillies (1860–1906), of 12 Hirt. Mary Gillies is well-known in St Kilda lore on account of her middle names. The (perhaps slightly enhanced) story goes that her mother had a difficult childbirth, and was assisted by Jemima, the wife of Captain Henry Charles Otter (1807–76) who was there with a deputation, including the Free Church minister of Portree, in his paddle steamer HMS Porcupine. After a successful delivery, the child was christened Mary Jemima Otter Porcupine Gillies.

The new couple took over the croft of the groom’s grandfather John MacDonald (1807–92) at 2 Hirt, and it was there that Finlay MacQueen lived until the final evacuation of the island in August 1930. After an unhappy stay in Ardnarff in Lochalsh – the isolation was ‘worse than Hirta’ – he eventually moved to Tulliallan by Kincardine in Fife, where he lived with his daughter Mary Ann and her husband Neil Ferguson until his death in 1941. MacQueen, who only ever learnt a few words of English, did return to the island with a handful of other St Kildans between May and August 1938, for a holiday, a spot of recreational fowling, an opportunity to sell postcards and souvenirs to day-trippers, and apparently to help to dye and weave St Kilda tweed for the then owner the Earl of Dumfries.

A fortnight before he returned to his old home Finlay MacQueen, along with his fellow Hirteach Neil Gillies, had been presented to King George VI and Queen Elizabeth in the St Kilda Cottage – where ‘St Kilda Tweed’ was heavily advertised – at the ‘An Clachan’ Highland Village exhibit at the opening of the British Empire Exhibition of 1938 in Bellahouston Park, Glasgow. Despite attracting some controversy, the plaster-cast cottages, castle, and cill of An Clachan, occupied by Gaelic speakers mending nets, making creels, and weaving, proved remarkably popular with Highland Gaels and their Lowland expatriate cousins alike, a fact grudgingly admitted by the exhibition manager Captain Sidney Graham: ‘While I have yet to be convinced of the desirability of displaying to the world at large houses of the type in which no human being should be expected to live in the year 1938, there can be no doubt as to the drawing power of the Clachan.’ Among scores of others on the Exhibition General Committee was Alexander Carmichael’s grandson James Carmichael Watson (1910–42). The Clachan’s Highland castle was decorated by mural panels depicting the story of Deirdre, the tale which Alexander Carmichael had been so influential in publicising to a wider Scottish audience.

It is interesting to think that even today a number of Glaswegians of a certain age will have seen, and perhaps even met (though maybe not talked to) the St Kildan Finlay MacQueen, an old man born in the middle of the nineteenth century who had spent the first seventy or so years of his life on ‘an island on the edge of the world’.