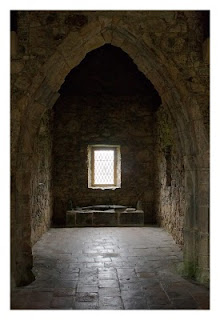 In one of his very last fieldwork notebooks Alexander Carmichael collected a narrative on 31 August 1909 about an expert swordsman called John MacLeod. Unfortunately, no dates are given but it may be assumed that the man commemorated on the tomb was a figure of note and was probably one of the Gaelic élite. It also shows that Carmichael’s tastes were truly eclectic and almost nothing it seems was too trivial not to be noted down.
John Macleod
Had been in the war cam[e]
home full of praise and
honour. He had been in the
beinn-sheilg and when
a snow storm came on and
he was smothered beside his
own garden wall close
to his house – He was
a famous swordsman
the most famous in his
day – He could cut the button
from the neck of his opponents
shirt. His tomb is in this
church at Rodail with the
figure of a man as with
sword in full length on
his stone. Hewed in Geo-
Crab Harris

It seems likely that this story forms the background to the tomb of a knight in armour that still can been seen at the southern transept of St Clement’s Church, Rodel, Harris. The tomb is believed to commemorate John MacLeod of Minginish (near Talisker in Skye), clan leader of the MacLeods from 1551 until his death in 1557. If this identification is correct, and there is perhaps no reason to dismiss it, then this John MacLeod was known as Iain a' Chuail Bhàin (John of the Fair Locks) who was embroiled in a leadership struggle for the headship of the MacLeods for the bloodthirsty chief, Iain Dubh MacLeod, massacred Iain a' Chuail Bhàin's descendants. The only one to survive was Norman, a nephew of the last chief, Iain Dubh, who was being fostered at the time in Harris by a cadet of his clan. John MacLeod was succeeded by the representation of the MacLeods of Waternish by his grandson, Norman MacLeod.
References:
CW 117, fol. 17v
Image: Tomb of John MacLeod, St Clement’s Church, Rodel, Harris
at 14:12