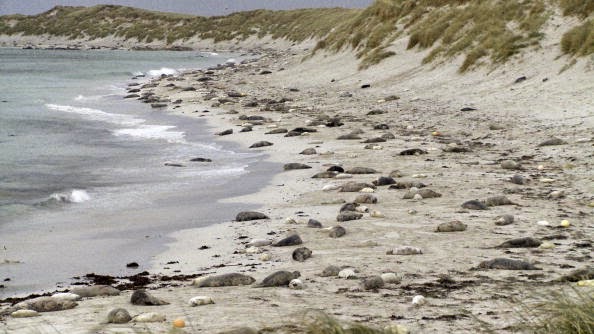 In our first blog post at the beginning of the week, we promised two ‘local colour’ newspaper reports about the seals of North Uist. Here is the second one, taken from the Inverness Courier of 27 December 1849: an anecdote relating to Heisgeir or the Monach Islands:

Tethering a Seal. – Harris. – In these outlandish places, where parks and enclosures are few and far between, it is the well-known custom to bind the fore-legs of almost all domestic animals, in various ways, to prevent them injuring crops, trespassing on neighbouring lands, or travelling to inconvenient distances from the scene of their labours. But we never heard of securing seals in this manner until the other day, when such an occurrence took place in the hyperborean island of Heisker, one of the inhabited isles belonging to, but several miles distant from, North Uist. Some of the inhabitants, in an excursion to one of the islets on which they keep sheep, found a seal on the sea-shore, but being too young to be of any use, they thought of an expedient to secure the parent; they tied the young phoca to a rock attached to a stake fixed a considerable distance above the shore; but the weather turning coarse, they were obliged to put back immediately for home. On visiting the island the next day, they found the tracks of the old one to and from the place where her offspring was held captive. The young cub was brisk and lively, after having evidently received food from his attached, and no doubt much distressed, mother.

Was this a usual stratagem for the islanders of Heisgeir, or a more desperate expedient in an attempt to secure some extra livelihood at a time of severe famine and atrocious weather?

A report in the Elgin Courier the following year, on 29 November 1850, suggests that, although the Hasgeir seal hunt had been once more delayed by bad weather, this time the hunters were better prepared for their expedition:

Capture of Seals. – A few days since, the weather for some forty-eight hours calmed down, and some dozen North Uist men proceeded in two boats on their yearly visit to Hashgir, in search of seals. They were very successful, for they killed no fewer than fifty-one of all sizes. One seal measured nine feet in length, and six and a-half in girth, and yielded nearly thirty Scotch pints of oil.

The Macdonald estate had been trying to sell North Uist since 1848. Eventually the island found a buyer: Sir John Powlett Orde (1803–78), who had succeeded to the baronetcy of Morpeth on the death of his father, the eccentric naval commander Admiral Sir John Orde (1751–1824). News of the purchase appeared in the Inverness Courier of the 22 February 1855; Sir John took possession the following Whitsunday. As a result of his marriage to Eliza Woollery Campbell (d. 1829), Orde had acquired the Kilmory estate by Lochgilphead in Argyllshire, as well as enjoying Eliza’s share of the profits from the sale of two sugar slave plantations in Jamaica sold to the Leith merchant Sir John Gladstone (1764–1851), father of William Ewart Gladstone, the Prime Minister. For his new country seat Orde had built the rather unattractive Kilmory Castle, today the headquarters of Argyll and Bute Council. By all accounts a remarkably disagreeable character, the baronet’s memory remains notorious in Lochgilphead to the present day.

Orde nevertheless won over his new tenants in North Uist, donating a site for the first Free Church on the island, in Paible, and, according to an Inverness Courier report of 18 September 1856, acting ‘very handsomely to the large tenants here, by giving them new leases of their farms without even advertising them. The smaller occupants also are left as they were without any removals, I believe, unless from one part of the property to another.’ This was a very different way of running the North Uist estate from that of previous administration.

The following year, Orde’s son, Captain John William Powlett Orde (1827–97), apparently took part in the Hasgeir seal hunt himself. A column in the Inverness Courier of 29 October 1857 describes how:

Captain Orde has been shooting here for the last fortnight. He is considered an excellent sportsman, and a very condescending and amiable young man. The other day, he ventured with a boat and crew into ‘Hasskir,’ a range of wild steep rocks, lying about fifteen miles to the west of this island, in the direction of St Kilda, and fetched thence no less than forty seals. It is rumoured that Captain Orde, and not his father, is the real proprietor of this estate; we, however, naturally look to Sir John himself as our head. Be that as it may, one thing is certain, that people are fully as well satisfied under the new rule as they ever were under the ancient line of the Macdonalds.

A captain in the 42nd Highlanders, the Black Watch, Orde would have been a good shot, probably armed with a new Enfield rifle. The Hasgeir seal hunt had become a field sport.

We thought that we’d end the blog with poetry concerning some of the characters that we’ve met already this week. Here are some verses from Cuideachadh Mhaighstir Ùisdean by the Rev. John Norman MacDonald (1830–68), Church of Scotland minister of Harris, third son of Roderick MacDonald of Cunambuintag in Benbecula. The brief biography in the Fasti [vol. vii, 190] praises his ‘outstanding ability and culture … [H]e devoted much of his spare time, both in his student days and afterwards, in collecting the floating traditions and poetry of his native Uist.’ In the third volume of Clan Donald [389] he is described as ‘[a] scholarly man of wide and varied culture, [who] left a large number of valuable MSS., dealing principally with the history, lore, and poetry of the Outer Islands.’ Both of these accounts will derive from his nephew, the Rev. Angus MacDonald of Killearnan (1858–1932). We have met the Rev. John Norman MacDonald as a bard before, writing in the name of his fellow minister the Rev. John Alexander MacRae (1832–96) of North Uist, fourth son of the Rev. Finlay MacRae.

Cuideachadh Mhaighstir Ùisdean, printed on pp. 143–7 of the MacDonald Collection of Gaelic Poetry (Inverness, 1911) edited by the Rev. Angus MacDonald of Killearnan and the Rev. Archibald MacDonald of Kiltarlity, is the comical answer to ‘verses perilously bordering on the satirical’ [MacDonald Collection, xxvii] composed by the Rev. Hugh MacDonald of Bernera (1822–88). The latter was himself a native of Benbecula, son of John MacDonald of Torlum, and grandson of Domhnall Bàn MacDonald, brother of the Ùisdean Bàn of Cille Pheadair, South Uist, whose fascinating testimony regarding Ossian is printed in the Appendix of the Report of the Committee of the Highland Society of 1805.

According to the Cuideachadh, the marvellous poetry composed by the Rev. Hugh has not only put the entire countryside under enchantment, but has wakened the ferocious heroes of old. The land is now in danger. Among those his poetry has aroused is Odar’s head, rising out of its resting place in Griminis:

There was uproar and terror
Above the dreadful grey billows
In Griminis when the green hill
Was shaken, out of which arose
The skull of Odar, covered with blisters,
With his gloomy brows and beard,
Hair unkempt about his ears,
A truly terrible sight indeed.

His two eyes were like the sun rising
From an awful sea on a winter morning,
His mouth was [?a creek of caves]
With stinking smoke coming out with a snort.
Lord! what a loathsome sight!
The birds in the skies took fright,
And every creature made off in haste.

When he shook the earth out of his teeth,
His grey sideburns, and his beard,
He roared, the skies shook,
The ocean shook, and the hillsides;
‘Where’s my body? Give it back immediately
Unless it was mangled asunder,
Although I should eat and drink forever,
That won’t appease a third of my sorrow.’

Strong though the soldier in Bhàlaigh was,
Resourceful in battle,
He fled – and we were in great distress
That he was no better than a Turkey cock;
He thrust his head under his mother’s coat,
And his wail was heard as far away as Langais;
And although a full artillery battery were beside him
He wouldn’t suffer contempt or violence.

The tacksman of Scolpaig was distressed
He made a hasty retreat,
He wouldn’t look behind him,
Even though all Britain were to be promised to him;
As an ostrich in distress
Will hide away its head under a branch,
So he thrust his head in the rock seaweed,
And he left his own seaweed [?exposed – probably indecent!] to the moon

The skull looked about
And noticed his body,
He grew troubled and disturbed
And said fretfully, ‘Jump up!
I’d be glad to be on your shoulders,
But dear me! I’m sorely hurt,
You’ve grown so insignificant
That your hips won’t even fill my bonnet.’

The tacksman of Scolpaig started and jumped up,
With speedy leaps he made for the beach
Intending to escape from the quarrel
Under the protection of the hard sword of James of Bhàlaigh;
It would be enough, to keep the head and the ears
That were on his shoulders already,
It wouldn’t be good for it to be taken off by the giants
Who had got more of them than was good for them [?anyway].


The meaning of the last two lines isn’t entirely clear.

Seumas Bhàlaigh, the soldier with his sword, is Major James MacRae (1834–73), whom we’ve met earlier reciting to Alexander Carmichael the story of Odar, his leap, and his head. The tacksman of Scolpaig, whose massive frame is nevertheless still too small for Odar’s head, is Carmichael’s good friend John MacDonald (1824–88), factor of North Uist.