Moluag (530-592) was an Irish missionary, educated and trained in Bangor, who came to Scotland and is believed to have founded over 100 communities during his lifetime, the most significant being at Lismore, Rosemarkie and Mortlach. His name has been recorded in Irish as Lugdach and Lughaidh, and in Latin as Lugidus, Lugādius and Luanas. His name also often appears with the diminutive of endearment – Moluoc. A popular belief is that his name is derived from mo ludag my little finger but this surely is based on the circumstances by which he claimed Lismore (noted below).

He was a contemporary of Columcill and the following account of how Moluag came to settle on Lismore provides an insight into their relationship:

After looking around him in Argyll, S. Moluag resolved to settle in Lismore – the green island in Loch Linnhe. S. Columba heard of his determination and resolved to forestall him. According to the Gaelic verses (Carmichael), which have been passed down from lip to lip for centuries as S. Moluag approached Lismore he beheld a boat containing S. Columba making for the shore at highest speed. S. Columba’s craft was the faster, and when S. Moluag saw that he was going to lose, he seized an axe, cut off his little finger, threw it on the beach, and cried out “My flesh and blood have first possession of the island, and I bless it in the name of the Lord.”

It is believed that after displaying his annoyance by spouting curses at Moluag, Columcill continued on sailing and arrived at Iona.

The saint’s missionaries expanded from Lismore to the larger Western Isles and he was extremely influential in Pictland, owing to a good relationship with the King Brude. Moluag has frequently been described as being gracious and decorous, and his good nature is obviously reflected in his popularity throughout Scotland.


Moluag was invoked when seeking a cure for insanity, and the church on Lewis was frequently visited by pilgrims for this purpose.
Moluag died 25 June in Rosemarkie and Carmichael notes in Carmina Gadelica:

When the news reached the people of Lismore that their beloved St Moluag was dead, twenty-four of the strongest men of the island travelled to Ardclach and brought home the body and buried it beneath the altar of his church in the centre of the churchyard. About the close of the last century, while opening a grave about this place, a tripod gold candlestick was found. Calcined bones, stones, and wood came up in the debris where the tripod was discovered. The church, crowded with people, had been burned by the Norsemen. The tripod may have formed part of the altar furnishing of the church, or it may have been buried with St Moluag. It is said to have been plain, but beautifully formed. 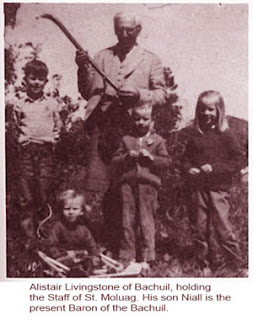 The Barons of Bachuil on Lismore are the hereditary keepers of the Bachul Mor, St Moluag's pastoral staff.


Although overshadowed by Columcill, Moluag was an important figure in Scottish history and responsible for founding the bishoprics of Aberdeen, Argyll and Ross.
References
CG, ii, 242-243.
Scott, Rev. Archibald B. 'St Moluag and his Work', Transactions of the Gaelic Society of Inverness, xxvii (1908-11), 310-323.
http://webdb.ucs.ed.ac.uk/saints/