A keening for Roderick MacPhee - 2 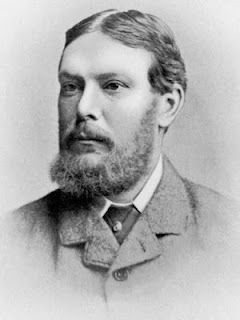 The mysterious drowning of a seaman as skilful and well-known as Roderick MacPhee clearly gave rise to a whole host of rumours and speculations in the islands. This was especially the case at a time of the year when Barra was bursting at the seams with outsiders – fishermen, coopers, and gutting women – involved in the rapidly expanding herring industry, then newly established in Castlebay. An item in the Inverness Advertiser on 14 June states that nearly 900 fishing boats were in the area at the time, with at least 40,000 barrels of herring despatched from the island during the week ending 11 June, conveyed on twenty steamers to Glasgow, Liverpool, Leith, and other ports (incidentally, the Glasgow Herald on 18 June states that 19 cargoes of herring had been despatched from Stornoway that week ‘for various parts of the Continent, chiefly Stettin, Hamburg, and St Petersburg’). The Inverness Advertiser article declares that ‘20,000 strangers’ were employed in the fishing: we’re not entirely sure about this number, but there certainly must have been more than 2,000!

The Boat Accident off Barra Head.

4th June.
Sir, – I am astounded to see the loose statement, copied in your paper of to-day, with regard to the Barra Head Accident. It is evident that the writer, whoever he may have been, was not aware of the circumstances, or he would not have made misstatements which can only cause anxiety to relatives and friends. To show how ridiculous the whole paragraph is, allow me first to state that the gentleman who hired the boat was safely landed at Pollockawe [‘Pollacharra’ must have been the original] in South Uist, that it was on the return journey that the crew of two men and a boy were lost. The statement of ‘a few hours afterwards … the boat was found,’ is totally without foundation, as it was not till the following morning (Sunday[ 29 May]) that the accident was known to have taken place. The last sentence of the paragraph only makes confusion worse confounded. I may further state that Rory MacPhee was not the lighthouse keeper, but only the man who had charge of the Lighthouse Commissioners’ boat. A little reflection might have shown that a lighthouse keeper could not be cruising about in a boat and attending to his duty at the same time.
And now, Sir, to justify my remarks on this subject, and to show that I have good cause to be annoyed at the blundering account given in your paper, allow me shortly here to state that I was one of the gentlemen who crossed in Rory MacPhee’s boat on the day of the accident, and am acquainted with the particulars. – I am, &c.,     B.

A more accurate report was printed in the Inverness Advertiser of 14 June, and excerpted in the Scotsman the following day:

Melancholy and Fatal Boat Accident at Barra. – A melancholy occurrence took place off Barra Head light-house on Saturday, the 28th ult., by which three persons were drowned – viz., Roderick Macphee, the light-house ferryman, upwards of 40 years of age; Donald Macneil, about 38 years of age; and John Macneil, about 16, both of the latter boatmen. On the return journey with two gentlemen tourists, who had crossed the sound between Barra and Vatersa, the boat appears to have foundered in the surf near the rocks, as it was found a few hours afterwards with keel up, and sail set, but no trace of the unfortunate occupants. Both of the deceased men have left wives and families, who were dependent on them for support. Some contributions have already been received in their aid; and it is to be hoped a generous public will not overlook this unfortunate case.

But who was the mysterious gentleman ‘B’ who had written the letter to the Glasgow Herald? His surname is given in the following report in the Inverness Courier of 16 June:

The Boat Accident at Barra. – A correspondent sends us particulars of the sad occurrence at Barra, on the 28th ult. On that day the Barrahead lighthouse mail ferryboat, manned by the ferrymen – Roderick Macphee, Castlebay, Barra, aged 35 (an able and careful seaman, and a most obliging and respectable man); Donald Macneil, Island of Minglay, aged 38; and John Macneil, Elen [i.e. Glen], aged 16, with two gentlemen who had been visiting Barra-head, sailed from Castlebay by the east coast of the island, and across the Sound of Barra to South Uist. After landing the gentlemen there, the boat, with its crew, returned to Castlebay by the west coast of Barra, the wind blowing a stiff breeze from the east. Nothing further was heard of the boat until Monday, when some lobster fishers found it out at sea under water, with the sails set, about two miles to the west of the entrance of the sound, between Vatersay and Barra. They secured the sails and bowsprit, but as the day was stormy they abandoned the boat. None of the bodies have been found. It is believed that in sailing over one of the sunk rocks at the entrance of the sound, a sea broke, filling and capsizing the boat. Macphee has left a widow and five children. Immediately on hearing of the occurrence, Mr Brown, one of the gentlemen who had taken his passage in the boat from Barra, sent the widow and children £5. It is hoped that the public will not overlook this unfortunate case.

As we shall read in the next blog, the two gentlemen ‘had been on a scientific excursion through the Southern Isles of Barra’. ‘Mr Brown’ must be the well-known naturalist and ornithologist John Harvie Brown (1844–1916), who had not yet added a hyphen between his two surnames. His companion was Captain Henry Wemyss Feilden (1838–1921), 4th King’s Royal Regiment, who led a rather extraordinary Victorian life worthy of (a heroic) Harry Flashman and who was later described by his friend Rudyard Kipling as ‘the bravest man I ever met’. On 27 September 1870 a paper by Captain Feilden was read to the Glasgow Natural History Society, ‘part of the journal of a tour in the Outer Hebrides made by Mr Harvie Brown and Captain Feilden during the summer [of] 1870. The paper contained many interesting ornithological notes, and descriptions of shell mounds visited by the author.’ Excerpts were printed in the Proceedings of the Natural History Society of Glasgow, ii (1869–75), 58–60. Embarking upon a paper about the antiquities of Uist, Alexander Carmichael would reminisce:

In the summer of 1870 Captain Feilden of the [     ] made an ornothological [sic] tour through the Outer Hebrides. I had the pleasure of his acquaintance and his subsequent correspondence upon subjects of mutual interest. [CW429 fo.1]

Carmichael had also embarked upon a long-lasting correspondence with John Harvie Brown. Letters from Carmichael in the latter’s archive, now in the National Museums of Scotland, date back to at least March 1871, when the ornithologist asked Carmichael to prepare ‘a list of the Gaelic names of birds.’

Images: J. A. Harvie-Brown, one of the last two men to see Roderick MacPhee and his crew alive.
at 22:00