A Day in the North Harris Hills 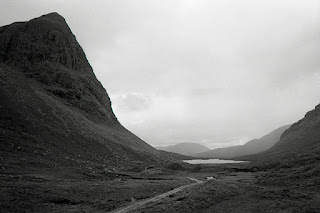 Here is Alexander Carmichael enjoying what must have been a rather short and maybe wintry day out in the hills of North Harris with John MacLeod of Tolmachan, Miabhag nam Beann.

John Macleod son of Finlay Macleod Gamekeeper Tolmachan Miabhag nam Beann with me. He knows the name of every place all over North Harris.

Cave under projecting rock. Wall built across projecting rock at mouth of cave. Cave looking down Gleann Miabhaig and over to Lews moors and mountains. Just under Stron Ard the wall is built to join the projecting rock on the top.
Another cave about 100 yards S.W. of this with all running under projecting rock. The wall of this cave is ?sided in ruins.
At Stron an Sguirt see a pair of eagles hovering over a small drove of ‘[?dus-grithich] agus daimh[’]. At foot of rock there are numbers of /ptarmigans/tarmachain running among the moraghan – moraghan beinne – shingle moraghan beinne – mountain shingle to distinguish this shingle from moraghan mara sea shingles. The ptarmigans are called gealag bheinn – mountain grilse mountain whiteling – from white winter snow plumage. The bird has a peculiar plaintive hoarse call or cry as if trying to expel something from its throat. I heard ‘tarmachain’ about half a mile about away from me. They rose in three flocks of 15, 25, and 35. They were in a transition state between their summer and winter plumage. The birds rose on the wing each flock following the other and went downhill and out of sight upon a lower level saw a small flock of six gorcocks red grouse moving about and then a baidne ghobhar – a flock of goats scrambling among the rocks and precipices and mountain screes.
Down in Loch Sguirt saw salmon leaping high up in the air and then falling down in the water with a splash – sometimes the splash made a great noise probably when the fish came down upon his side upon the surface of the water.
Sometimes the otter is seen chasing the salmon – an interesting sight. The salmon more likely the grilse – gealag mhara – sea-white trout, banag mhara sea-white trout flies through the water now and then rising in the air and coming down with a splash. All in vain however. The dobhar donn – brown otter gains upon the grilse and makes a meal of it.
If there be a stone standing in the lake or in the river the otter goes to it with his prize and eats the fish sitting or standing upon the stone. While eating the fish the otter closes his eyes and sees nothing and hears nothing. This is the time to have a shot at the otter if within reach.


When the otter [actually seal!] is the hound in the chase
The hare of the ocean cannot escape.