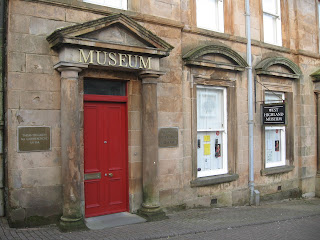 Our home away from home!
Last Saturday the team headed up to Fort William for our second photographic venture at the West Highland Museum. The Museum in now open to the public 10:00 – 16:00 except Sundays (open to 17:00 as of April) and is well worth a visit. Keep an eye out for the Carmichael Collection reference number, WHM 1992 13, if you do visit! 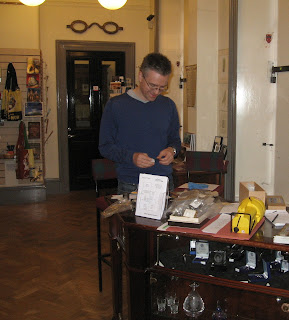 Domhnall Uilleam sorting out the coins.
We were ensconced by 8:30 on Sunday morning because, luckily, everyone remembered that the clocks went forward! Firstly Carsten Flieger, our photographer, was keen to finish up the bronze brooches and then move swifly on to the coins. And there were plenty of them, especially Spanish coins which were sent to Carmichael by his son who lived in Spain.
Once the coins were photographed there was quite a selection left including an oil lamp with man’s head, sheep’s jawbone, Egyptian figure, purses and the whorls. We had previously photographed the whorls as they were tied together on twine by and had a handwritten label attached pertaining to how and where he came across them. The team thought the whorls deserved closer inspection and Carsten photographed them according to size and stone. 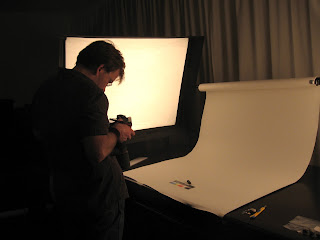 Carsten busy at work.
All the photography is completed for the time being and we have over 500 images ready to be processed. It will be a busy couple of months for the team but quite exciting. As the last couple of blog entries have discussed, there are references to the objects in the notebooks and it is great discovering the provenance of these objects. 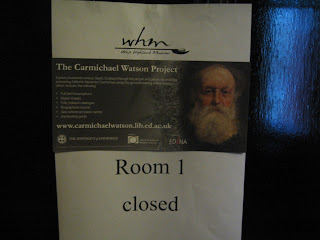 Do not disturb!
The only downside to the trip was that the weather was so fantastic and we were stuck indoors!

Again the team would like to thank Sally Archibald for her patience and enthusiasm as well as the WHM manager Colleen Foggo.
at 10:24