Just yesterday as I was searching the collection for seabean references I happened upon a description of the Creepy Stool that is housed in the West Highland Museum. This was very interesting as we photographed the stool on our last trip to the museum.

The writer possesses a small stool on which Prince Charlie sat the night Flora MacDonald took him across from Uist to Skye. The stool is simply a tree root on three legs and is like a [above: bread] toaster [deleted: slightly more curved]. It was known in the family from whom it was obtained [later addition: and to whose ancestors it belonged when used by the Prince] as Far chrann a Phrionnsa the [above: food] toaster of the Prince furm a Phrionnsa the form of the Prince and Stol a Phrionnsa the stool of the Prince.

CW228 is an article about The Prince Charlie Stool and gives an account of how Carmichael came into possession of it. He received it from Rachel MacDonald, Bororay, North Uist whose mother and mother’s mother passed on the stool. On a visit to the island Carmichael noted that the history of the stool was well known and that the history was ‘clear and distinct’. He was eager to meet the owner and see the stool and on meeting her he asked her for the stool! Initially she was not eager to part with it while she was alive but some years later she travelled to meet Carmichael at Lochmaddy in order to give him the stool. Alexander placed five shillings in her hand ‘to buy some small gift with it before she went back to her island home’ but Rachel refused to accept the money. She said it took away from the pleasure she had in gifting the ‘far-chrann’ to him.


A number of items in the Carmichael Collection at Fort William still have their tags with them, some written by Alexander and others by his daughter, Ella. Here is the label that is with the stool, can you make out what it says? 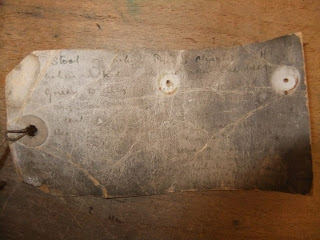 This is a really exciting time for the team to be combining the textual collection here at the University of Edinburgh with the object collection housed in the West Highland Museum. In the coming weeks we will be working on getting the photographs ready for the website!