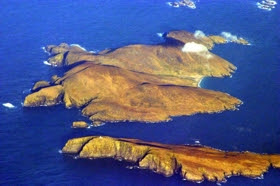 As is well known the Hanoverian government, in the wake of Culloden in 1746, took some very heavy handed reprisals in order to put a stop to any future resistance from any disaffected Jacobites. One person – namely Captain Carolyn Scott – did not paint himself in glory at all for, according to oral testimony, he was a bloody and brutal man who gave but scant measures of justice to those who he had been ordered to repress in no uncertain terms:
The notorious Capt[ain] Scott came
to Mi[ng]ulay after Culloden. He got hold
of a man there Iain Mac Fhearachair ic Neill who had been in the army
of the Prince and without trial judge
or Jury hanged the man. The man whose
name was Iain Mac Fhear[achair] ic Mhur[chaidh] MacNeill
Iain mac Fhearachair ic Mhurach[a]idh ic Neill
was remarkably big and strong. When
his bones are still bro[ugh]t up they all
were large. Capt[ain] Scott and his soldiers
car[r]i[e]d them[selves] most ferociously. They
amused them[selves] by flaying the cattle
of the people alive and allowing them
then to run mad about the island.
Among the band was a High[lander] who after
the man was hanged whisper[ed] to the
peop[le] not to touch the body as Scott wou[ld]
yet return before going into the boat
and would give their houses to the flames
for the simple want [of] an excuse
The peop[le] took the advice. Scott re[turned]
from the strand but the body of the
man was where he left it so Scott
went away. The man had been
living in a cave long previous to this.


Another anecdote about Captain Scott in Mingulay stems from the pen of Miss Ada Goodrich-Freer in her rather romantic and over-wrought work entitled The Outer Isles (1904):
There was about this time a soldier, who had been in the ’15, who belonged to Mingulay. He was great-uncle’s son to Ian yonder, the son of Hamish, and he had some money, and the soldiers were coming after him. His brother advised him to put away the money in case of what might happen, but he said, ‘They’ve not done with me yet.’ However, he was surrounded by soldiers, and Captain Scott [whose name is execrated in the islands] ordered him to be shot, and he was robbed and murdered at the back of the house where the stackyard is.
The very same Captain Scott had been captured at the very outset of the ’45 Rebellion when he was captured at the skirmish known as the Battle of Highbridge (in Brae Lochaber). He was later released and, apart from his reputation for cruelty, is remembered for his successful defence during the Siege of Fort William in March 1746.
References:
CW114/72  fos, 83v–84r.
Goodrich-Freer, Ada, The Outer Hebrides (Westminster: Archibald Constable & Co., 1904), pp. 401–02.
Image:
Mingulay and Berneray.
at 11:48