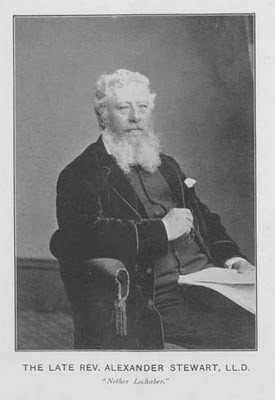 Continuing with the second excerpt from the appreciation of the Rev. Alexander Stewart contributed by Donald Ross to the Inverness Courier, more detail emerges of Nether Lochaber’s fortnightly literary columns. The two books, which were the fruition of such literary labours, are also name-checked. It may also be added at this juncture that the Rev. Alexander Stewart was also a notable poet – much of his output was posthumously edited by Malcolm C. Macleod and appeared in Modern Gaelic Bards (1913) – as well as a founder member of An Comunn Gàidhealach (or the Highland Society), founded in Oban in 1891, and the Gaelic Mòd, an annual festival held for over one hundred years now and celebrated recently in Caithness.
FIRST CONTRIBUTION TO THE “COURIER”
During the first ten years of his ministry, Stewart must have developed into an assiduous student of nature in all its moods, for he became a district correspondent to the “Inverness Courier,” then edited by Dr Robert Carruthers. Carruthers had earlier been the literary godfather of another of his country contributors, the Cromarty stonemason-geologist, Hugh Miller. His first article appeared on 21st April 1859, entitled “Lochaber—A Chapter for Ornithologists.” It contained 1,100 words, unsigned, on birds and meteorology, and started with a note on recent weather “with us in Nether Lochaber” and dealt with a weather forecast and a find of old coins. On 19th May it was about potatoes and grampuses. The fourth letter, a fortnight later, appeared under “The Weather, etc.” discussing peat; and dogfish at Corran. In June there was more of weather, a dissertation on the cuckoo, and a report of the drowning of a village child in the peat moss at Cuilchenna.
Later contributions demonstrated and consolidated the evidence of his intimate knowledge of folk-lore, and Gaelic poetry, tradition and legend. They grew under the influence of his mentor Carruthers into a familiar and characteristic form. Stewart applied to this writing his experience and the imagination which flourished on experience and the deductions of his enquiring mind. His greatest quality was his ability to write in an unaffected, graceful literary style, unpatronising, apparently artless, yet full of art. He talked about archaeology, natural history, the habits of birds, beasts and fishes, and he could communicate to his readers the wonders of science in a manner painless and pleasant.
The heading of his articles, “Nether Lochaber”, soon became his pen-name, and ultimately a second, informal everyday name. Long before 1881, when Alexander Mackenzie, historian of the clans, champion of the oppressed, and editor of the “Celtic Magazine”, named him the “Prince of Provincial newspaper correspondents,” his column was established as one of the most attractive features of the “Courier.”
BOOKS WIDELY WELCOMED
It is not surprising that public acclaim demanded book publication, and the first Stewart collection came on in 1883, aptly titled “Nether Lochaber: the Natural History, Legends, and Folk-lore of the West Highlands.” The book contained a selection from the records of the years 1868 to 1878. Chapter I is a good introductory example of “Nether Lochaber” in all his exuberance and diversity—primroses and daisies of early March, a weather forecast embellished with a Latin tag, quotations from Burns and Coleridge, the translation of a Gaelic poem, and the explanation of the Hebridean customs it described. The book was highly praised by the press. Among the many journals, Scottish and English, that welcomed it was the “Spectator,” whose review, a model of perspicacity and concise summing-up, said that it was “written…with that entrain with which a busy man throws himself into the favourite occupation of his leisure hours.”

The publishers must have been encouraged by the success of the book, for in 1885 appeared a second selection, “’Twixt Ben Nevis and Glencoe,” covering the years 1878 to 1883. This book continued to exhibit the author’s versatility and literary gifts as well as his accurate knowledge of scientific advance natural history, and Celtic folk-lore. Writing in 1881, Alexander Mackenzie has expressed astonishment of readers of the “Courier” that such a flow of science in popular form, and prose-poetry, could emanate form the “literary desert” of Lochaber. Yet we know that Stewart’s seclusion was pleasantly broken by visits from eminent men and women, and that correspondence linked him with people far and near. His memory was well stored with his youthful reading, and in the press of a busy pastoral life he kept abreast of the literature of the day. His material, too, was everywhere around him, the lore which he picked up in his rambles among the hills or along the shore, and in his talks with men and women at their daily lives.