Carmichaels in the Census - I 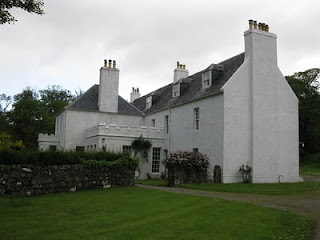 The blog ‘a’ spaidsearachd agus a’ meòrachadh’, by ‘Direcleit’, is a constantly expanding treasure-house of information about the people of the Outer Hebrides in the nineteenth century. A recent entry on Alexander Carmichael has inspired us, for our hundred and first post, to take a closer look at how the folklorist and his family were recorded in the censuses and other official documentation. We shall begin with Carmichael in his bachelor years, before his marriage to Mary Frances Macbean in January 1868.

Alexander Archibald Carmichael is relatively easy to track down. He was born on the 1 December 1832 to Hugh and Betty née MacColl in Taylochan, Lismore, and baptised a week later. A marginal note, ‘Ex[amine]d A.C.’, shows that Alexander must have looked up his own baptismal record during one of his visits to Lismore as an adult! The 1841 census has Alexander, recorded as seven years old, living with his tenant father, his mother, and his 20-year old brother Donald at Killean on the island. Ten years later, having finished his schooling, he is working as a ploughman at his parents’ house – a reminder of the strength and stamina Alexander Carmichael would need both for his career as an exciseman and for his avocation as a folklorist.

In 1861 Carmichael, recorded as 27 years old, is staying in Talisker at the foot of Glen Òraid in Minginish in the Isle of Skye, where he worked as an exciseman at the Talisker Distillery, actually nearly five miles away at Carbost, from September 1860 until March 1862. He is a visitor – that is, a lodger – in the substantial household of the owners of the estate, the 80-year old sheepfarmer from Kilmonivaig, Ewen Cameron (1780–1863), and his son Donald Colin (1827–83). Ewen Cameron’s father, Donald Charles, was born in 1745, his middle name deriving from the fact that among those attending his baptism was the newly-arrived Prince Charles Edward Stuart.

Ewen Cameron had come across from Beolary in Glenelg to take over Talisker from Hugh MacAskill in 1849, after the potato famine had devastated the latter’s finances. Both tacksmen left behind them a bad reputation for carrying out clearances, a charge forcefully put by John McCaskill or MacAskill, shoemaker, from the village of Fernilea (Fearann an Léith) on the tack, to the Napier Commission on 18 May 1883: ‘what the Assyrians left undone, the Babylonians finished.’

‘He [Ewen Cameron] got the tack thirty-three years ago, and when he came on he made up his mind that there should be nobody in the place at all, for McAskill had left remaining some of the people for his own convenience. When Mr Cameron came to Talisker he was not to do with any of the people, and as I have understood, he began to litigate with the landlord, holding out that the people being allowed on the tack was not mentioned in the lease. He would give us nothing, and he would keep nothing from us. The matter then came that he would have to take the tack as he got it, or leave it, and he stuck to it. He then deprived the cottars of the grazing which they had, and grazing for cows could no longer be got, not for twenty years or so. He took from us our peat mosses, and gave us a bog which neither man nor best made use of up to that time.’

MacAskill goes on to allege that Cameron cleared some twenty families from other parts of the estate into his own native township of Fernilea, using them as an enforced agricultural labour force for his farm.

MacAskill was probably related to another John MacAskill, cottar, Fernilea, who recited Carmichael a story about his ancestor Mac Iain Duibh mhic Thasgail on Hallowe’en Night, 1860, as well as to Kenneth MacAskill, one of the boys who recited the story Cigean, Cuaigean, is Boc Geal an Reubain on 30 January 1861.

Given his sympathies with the crofting cause, Carmichael’s association with the Camerons appears rather ill-starred. The connection, however, may have given Carmichael a first contact with the Outer Hebrides, a possible factor in suggesting to him the idea of working in Uist. It is likely that Ewen Cameron’s son Donald Colin was then already courting the woman he was to marry on 24 July 1863, Jane Macdonald (c. 1835–1915) of the Balranald family in North Uist.

Jane was the daughter of James Thomas Macdonald (d. 1855), the erstwhile factor of the North Uist estates known to the islanders as Seumas Ruadh. She was the sister of Alexander Macdonald of Balranald (d. 1901), Alick Bhaile Raghnaill, one of the most respected and popular tacksmen of his day in the island. Another of her siblings was Anne Margaret, wife of the Sheriff-Substitute at Lochmaddy, Charles Shaw W.S. (d. 1885), ‘An Siorram Glas’, to whom Carmichael would bring ‘strong recommendations from friends of the highest respectability’ when he arrived to take up his post in Lochmaddy in December 1864. The Shaws’ daughter Anne would marry Ewen Cameron’s nephew, Donald Charles Cameron, farmer of the neighbouring tack of Glenbrittle, in 1873. Yet another sibling of Jane’s was Jessie Catherine (d. 1895), the famous Seasaidh Bhaile Raghnaill whose romantic elopement with Donald MacDonald, the son of the tacksman of Monkstadt in Skye, had caused such a stir throughout the islands in 1850.

A playful love poem, Anns a’ mhadainn chiùin Chéitein, to Jane – ‘Sìneag uasal nam blàth-shùl’ – probably dates from the late 1850s. It was composed by the Rev. John Norman MacDonald (1830–1868), minister of Harris, in the name of the Rev. John Alexander MacRae (1832–96) of North Uist. Jane was MacRae’s first cousin.