The Old Schoolhouse of Mingulay 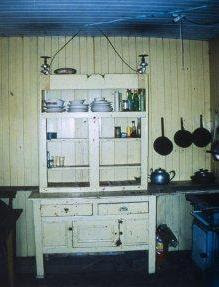 While visiting Mingulay in August of 1867, Alexander Carmichael took the opportunity to take a look around the old Schoolhouse. He left a very detailed description of the building’s interior and one may speculate that such an interest was piqued by Carmichael’s curiosity because it may have reminded him of his own far off schoolboy days back in Lismore when he attended Samuel MacColl’s classes. The Schoolhouse was rebuilt by the architect Alexander Ross in 1881 who specialised in the construction of rural buildings. It is not on record but it might be safe to assume that perhaps the Mingulay Schoolhouse was the remotest building that Ross ever undertook to construct. Given the relative isolation of the island – eventually abandoned completely in 1912 – a dozen or so miles south of Barra, it would have been one of his most difficult commissions to carry out. Carmichael’s short account is full of fascinating details and even includes seemingly one oddity given that a Protestant religious work, Confession of Faith, should have found its way into the school. But as the school was established by the Free Church Ladies’ Association then such literature would have been used in order to try and convert the staunchly Roman Catholic population to the Protestant faith. Needless perhaps to say the Mingulay folk held onto their faith but the school was given the nick-name Sgoil nan Leadaidhean.  The schoolhouse is one of only two remaining buildings left on the island – the other is the chapel house – and was recently refurbished to allow a comfortable place for visitors to stay. 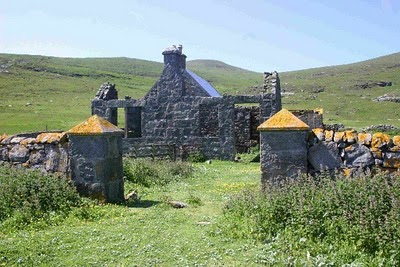 Teacher – Mi[ng]ulay. His house is
about 30f x 13. It was built by the native
sand is most rude and primitive. Ab[out] 18 f[eet] of this
is the schoolroom. The other end is the teacher’s.
The fur[niture] con[sists] of the bed which serves the treble pur[pose]
of a bed a parti[tion] and the top a gener[al] lumber
room. The teach[er’s] trunk which serves as dining table
There is a pri[mitive] overgrown round stool which
seems to have once formed a quern stand and
which now forms all the pur[pose] of a baking table
a wash stand (about 1½ f[eet] high) one and one half
basin one bowl 2 cups & 2 saucers 1 small milki[ng]
jug minus the “lug” 2 pots size pigeons nest
2 large plates & 1 small 2 knives 2 egg spoon[s]
2 tea spoons a small delapitided [sic] 4 gall[on] cask
for holding meal 1 chair 1 stool and 1 course
piece of plank laid on stones at the side
floor in ruts and hollows and roof just
suf[ficiently] high to allow a tall man to stand upright
without touching the centre rafters. Sides of
house about 4½ f[eet] high in x 3½ out. 2 egg cups
Books Dunbars Greek-English Lexi[c]on Con[fession of] Faith
Virgil and Tacitus in the original.