Following on from a recent blog entry, Alexander Carmichael continues his notes on nature by turning his attention to a rather peculiar incident which he and his wife Mary Frances actually witnessed. It must have been quite a sight as Carmichael goes into some fascinating detail and, as was his usual way, his observations are keenly delineated. The images that he conjures up at the beginning of this excerpt shows that he had a humorous side to him as well, something that he was not perhaps renowned for as it hardly comes across, if at all, in any of the rest of his various publications: 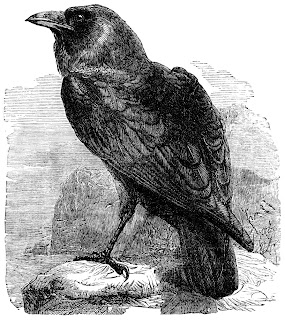 Birds have their peculiarities and characteristics like men; and like men, I should not, their diversion and weariness, and like them their joys and their sorrows. The raven is a staid-looking bird of solemn mien and serious aspect, whom one would not readily connect with the mirth of the dance and the joy of the song. Nay, one would as readily expect to see a whole Presbytery, Synod, or General Assembly taking the floor under the inspired port-a-bial of some grave and reverend father of the Church, as to see a flock of douce ravens reeling and setting to the lilting of one of their own number. Yet, strange as it may seem, I was so fortunate on one occasion as to see this–a sight which I need hardly say interested me intensely: Nearly three years ago, Mrs Carmichael and I were driving from Scolpaig to Newton, North Uist. Immediately on going round an òb, one of those shallow sea indentations so frequent in the Outer Hebrides, and at a place called Geireann, we saw a number of ravens going through some shuttle-cock movements that puzzled us much. Intervening hillocks, windings of the road, and rapid driving prevented us for time from having a continuous view of what was going on. But having come to a place where we had a near and full view of the birds, we stopped our little phaeton, and watched their singular proceedings in breathless silence. There were ten or twelve ravens in all, I forget which, on the smooth green grass adjoining the dry strand, and about a hundred yards below where we stood. On a small elevation hard by stood large, noble-looking raven; probably the Maccrimmon of his race, and piped a port-a-bial loud, fast and furious. To this all the other ravens responded by running and hopping and jumping rapidly and regularly from certain points in two opposite directions. “they reeled, they crossed,” but cannot say they ‘cleeked’, like the witches in Old Alloway Kirk-yard. But they certainly went through certain movements and evolutions, now singularly resembling the Reel of Tulloch, and now absurdly like the Lancers’ Quadrille. While these strange movements were going on by the ravens on the ground, another raven flew to-and-fro overhead, now making a wide circuit, and now a narrow one, and evidently guarding against surprise. Ultimately this strange dance–as I think I am justified in calling it–ceased, having lasted from the time we noticed the birds first, some seven or eight minutes. Immediately thereafter all the ravens flew away, not in a body, and in on direction, as their congeners the crows would have done, but like a gang of thieves taken by surprise, all in different directions, and in various ways, no two of them going together. I have been familiar with ravens all my life, and at various times and in various places have seen numbers of them together, but never before saw a raven’s quadrille, and probably never see the same thing again.