Yet another extract from the long letter – we cannot be accused of exaggerating – which Carmichael wrote to Nether-Lochaber informs this blog. This time Carmichael’s attention is turned to ducks and with his usual attention to detail furnishes some interesting details about ducks and their habitats and where he also offers some elucidation with regard to a Gaelic proverb as well as finishing off with a quote from the Lochaber bard, Iain Lom MacDonald, Bàrd na Ceapaich. 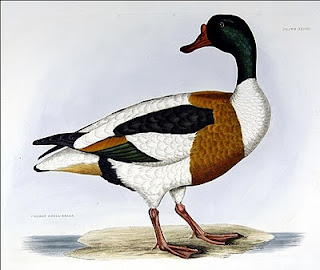 “I have seen ducks ‘posting’ the ground with alternate feet, much as you and I have seen girls in the Highlands ‘post’ in washing clothes. I remember especially a curious scene among our ducks when living at dear old Creagorry, in Uist. At the foot of the road leading up from the highway to the house there is a fresh-water pool, clear and bright, in which the ducks delighted to lave. On the green grass beside the bright pool about a dozen ducks and drakes were going through a singular performance when I noticed them. Slightly apart from the rest was large handsome drake, with green, lustrous wings, and bright, metallic, iridescent neck, singing to the rest with might and main, if singing his quacking might be called. All the other ducks and drakes ‘posted’ with alternate feet, and bobbed with their heads and necks and bodies up and down, while some ran to and fro, and jinked and jerked in and out among the others, much like the game of sūg-a-mhulain–catch me if you can–as you and I have seen it played, and played it ourselves in the long ago of our happy boyhood. Some whisked and whirled round about, and quacked their loudest. The whole flock quacked with all their might, and mingled and commingled their discordancies in the most amusing way; and when the fun as ‘fast and furious’ the flock threw themselves in a body on the surface of the clear, bright pool beside them, and there rushed about and splashed about in the happy joyousness of their hearts like creatures possessed. The gifted poetess, Mrs Mary Mackellar, reminds me that domestic ducks exhibit this bubbling, or dancing up and down motion, very strongly before rain. This is particularly observable of ducks in dry weather and just on the approach of thunder. Hence, doubtless, the application of the Gaelic proverb to a restless, expectant person–S coltach thu ri tunnaig ’s i ’m fiughar ti torrain–thou art like the duck expectant of thunder. Probably, however, none of the duck tribe possesses this peculiarity of posting with the feet to such a degree as the shell-drake–Gaelic, Crá-ghiadh. Uist, you know, is called Uibhist nan Crá-ghiadh–Uist of the Shell-drakes. Your own celebrated Lochaber bard, Ian Lom, poet-laureate to Charles II., and one of the most powerful Gaelic poets of his or any other time, says–