Neither Reads nor Writes 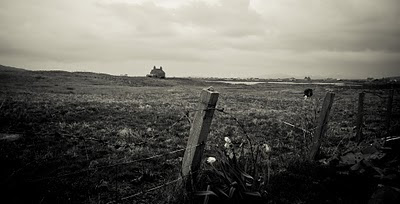 Last month we looked at what we know of the life of Malcolm MacRae, the shepherd from Abhainn Suidhe in Harris, one of the men from whom Carmichael wrote down a version of the famous – and famously long – tale Sgeulachd Chois Ó Céin, the Healing of O’Kane’s Leg. The other seanchaidh from whom Carmichael recorded the story is rather better documented – and this blog about him is therefore rather longer than usual!

Peter or Patrick Smith, crofter, was born in South Uist around 1796; his full patronymic was Pàdra mac Aonghais ’ic Dhòmhnaill ’ic Phàdraig. Patrick’s parents were Angus Smith, crofter, and Christina née Currie, descended from the learned MacMhuirich bardic family. It’s likely that much of Patrick’s rich store of tales was derived from his mother’s side of the family. Patrick Smith married Marion Campbell (b. c. 1796). Between 1829 and 1845 they are recorded as having had nine children. Marion had presumably died by the 1851 census, when Patrick is recorded as living with six of their children: John, Christina or Christy, Angus, Mary, and Marion.

By the time the Islay schoolteacher Hector Maclean arrived in South Uist on his first collecting expedition on behalf of John Francis Campbell at the end of July 1859, Patrick Smith, living on a four-acre croft in Leth Meadhanach, was known as one of the finest storytellers in the island: his name heads the list of men and women with lore which Maclean sent Campbell the following February: ‘a Catholic: neither reads nor writes’. Maclean recorded from him at least three stories, Mac a’ Bhreabadair, Mac an t-Seòladair and Am Marsanta a Chuir an t-Sùil à Mac an Duine Eile. On 3 September 1859, John Francis Campbell himself visited Smith. He was rather astonished by the story he was told: Am Marsanta…, the same tale Patrick Smith had recited to Maclean a few weeks earlier. This illiterate crofter from the Outer Hebrides had just recited for him a story which was clearly related to one in the Arabian Nights! On 17 September 1860 Hector Maclean once more visited Patrick Smith, recording from him the Fenian story A’ Mhuileartach, the Fenian lay Laoidh Oscair, and probably also the tale Macabh Mòr mac Rìgh na Sorcha.

Later in life, Carmichael wrote about Patrick Smith that, along with Campbell and Maclean, he ‘took down many pieces of prose and of poetry from him’. It’s rather striking, however, that the gauger doesn’t appear to have visited Smith until he had been more than four years in Uist. Perhaps he thought that Maclean had recorded the seanchaidh’s best stories already; more likely, Patrick Smith’s house in Leth Meadhanach, towards the southern end of South Uist, was somewhat out of the way for the exciseman as he travelled up and down the Long Island.

As far as we can see from his notebooks, Carmichael first visited Smith on 24 April 1869, when he was collecting Fenian ballads for the Rev. Archibald Clerk’s new edition of Macpherson’s ‘Ossianic’ epics. That day Smith recited for his visitor Laoidh na h-Inghinne and Laoidh Oscair. He had heard the first lay:

42 years ago [1827] from Rua'raidh mor Mac-a-Phiocair from Airi-mhic-rury North Uist. Mac-a-Phiocair lived at Leth mheadhonach for a year then for two years at Baoghastal whence he went to Cape Breton. He had much old lore.

Either narrator or transcriber must have made a mistake here: the most likely candidate is the bard, piper, and fiddler Niall Ruadh Mór MacVicar (c. 1779–c. 1861), who arrived in Cape Breton in October 1829. The second lay, which Smith had already recited for Hector Maclean nine years previously, he ascribed – possibly in error again – to a fellow villager Niall Ruadh MacDonald, ‘an old man of 75 who died 20 years ago’.

At the end of the version of Sgeul Chois Ó Céin which he wrote down from Malcolm MacRae in North Harris, Carmichael later scribbled a piece of information as a memo:

A man at Boisdale is said to have this tale. He was building the policeman’s house at Loch Maddy.

It’s likely that this man was none other than Patrick Smith. On 25 March 1871, in what must have been a lengthy recording session in Smith’s own house, Carmichael wrote down a twenty-page version of Sgeul Chois Ó Céin, which the seanchaidh had heard from a Canna man some forty years previously. There then follows a seventeen-page romance, Sgeulachd Gas Gruaige, which Smith had heard ‘from an old woman’ fifty years beforehand. He ended the céilidh, it seems, by giving Carmichael several historical anecdotes, probably for a paper the gauger was then preparing for his friend the surveyor Captain Frederick Thomas about the brochs and castles of the Outer Hebrides. It was maybe after Carmichael returned home that night that he scribbled another note at the end of Malcolm MacRae’s version of Sgeul Chois Ó Céin, describing Smith as a ‘fine old sgialaiche’.

Later that year another folklorist visited Patrick Smith. In autumn 1871 John Francis Campbell embarked on a strenuous tour around storytellers in the Hebrides, probably his way of recuperating from a distressing few months reporting on the Paris Commune that spring. On 27 September Campbell met Smith ‘on a horse going for peats’ and wrote down several Ossianic items from him, including the story of Diarmuid and the accompanying lay. Smith bluntly informed Iain Òg Ile: ‘How altered you are since I saw you ten years ago… Then you were a thin lad now you are thick in the flesh & fat and the head is turning hoary.’ Campbell notes in his journal that ‘[h]e said he could recite very many stories. Those who were there said [he could recite] five or six every winter’s night, he could not tell how many he knew, he said he could not remember [the names of] them all or count them, but when he began, others came into his mind. I feel quite sure that the stories of that man’s mind would fill a large volume.’

Alexander Carmichael, however, would record no more from Patrick Smith. It looks as if ever-increasing family and domestic commitments meant that he was unable to spend as much time touring and writing down long stories as he had when he first arrived in Uist. On 18 November 1877 Patrick Smith died of ‘natural decay’. In Carmina Gadelica Carmichael would pay tribute to him as ‘[a] famous story-teller and ballad-reciter with whom died much old lore’, ‘rich in literary matter of great and varied interest and excellence. … During the winter nights his house used to be filled with young and old listening to stories and poems rehearsed in simple idiomatic Gaelic.’

Alexander Carmichael also recorded material from Smith’s daughter Mary Mackintosh (c. 1828–83), Gearraidh na Mòine, wife of the tailor Donald Mackintosh and ‘a woman of great natural courtesy and intelligence’; as well as from his son John (c. 1827–1918) who ‘inherited some of his father’s lore but none of his diction.’ Carmichael’s friend George Henderson also recorded from John Smith, taking down the mock-heroic lay Laoidh an Amadain Mhóir, and a version of the Deirdre story, Triùir Chlann Uiseanais.