The Funeral of Alexander Carmichael

Almost a century ago – on 10th June 1912 – Alexander Carmichael was laid to rest in his native island of Lismore. The following description of his funeral, taken from The Oban Times, reflects the deep affection of those who attended the service at St. Moluag’s cemetery, named after the saint who founded a monastery there which subsequently became a seat of the later medieval bishopric of Argyll and the Isles: 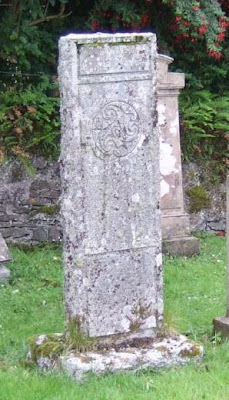 The funeral took place in Lismore Churchyard on Monday afternoon. The body was conveyed from Edinburgh to Oban by the morning train, which arrives in Oban at 12.35 p.m. There travelled by this train Mrs Carmichael, the widow; Dr. W. J. Watson, rector, Edinburgh High School and Mrs Watson; Mr Alastair Carmichael, Mr Kenneth Carmichael, the Rev. Malcolm Maclennan, St. Columba U.F. Church, Edinburgh; Mr. Dugald Maclean, solicitor, Edinburgh; Mr. Alexander Morrison, Edinburgh; Mr. Kenneth Macleod, Strathloch; Rev. M. N. Munro, Taynuilt; and Rev. C. D. MacIntosh, Connel, and others.
At Oban the party of mourners was joined by a company including, among others, Sheriff Wallace, Dunstaffnage; ex-Provost Dugald M’Isaac, Dr. Kenneth Campbell, Rev. J. M. MacGregor, Kilmore; Rev. D. J. Martin, Argyll Square U.F. Church; Rev. S. M’Cune, Oban Free Church; Mr Duncan Mackillop, Mr John Macpherson, Cluny House, and Miss Macpherson; Mr Henry Mackenzie, solicitor; Mr Hugh Macdonald; Captain Macdonald, late of the Northern Lighthouse Commissioners’ service; ex-Bailie John Livingstone, Mr Neil Carmichael, etc.
With a Carmichael tartan plaid thrown over it, the coffin, which was of polished oak, was borne from the train on the shoulders of relay of mourners along George Street to the North Pier. Here the remains, with a number of wreaths sent from Edinburgh, were transferred to Messrs MacBrayne’s steamer, the Fingal, and there went on board, in addition to the family mourners, a number of those who had joined the cortege at the railway station. About one o’clock the Fingal, with he colours flying a half-mast, left on the short journey to Lismore.
The funeral party was met at Lismore pier by a number of the inhabitants. The service in the churchyard was conducted by Rev. A. M’Bean, U.F. Church, Lismore, and Rev. J. M. MacGregor, Kilmore.
The Gaelic Psalm, sung to the plaintive notes of “Coleshill” by male voices in the Highland style in the peaceful churchyard girded by the loch and its enclosing mountains, was most impressive in its solemnity, and not less so was the finely-intoned prayer in the same language of the minister of Kilmore.
And then, in a grave overhung by a fine sycamore tree, the aged Highlander was committed to his rest.
Although he was for a long period non-resident in Lismore, to the very end Dr. Carmichael took the liveliest interest in the island, and was always ready to do his very utmost to further anything calculated in benefit of it. No fellow-islander who found his way to Edinburgh but was sure to be visited by him, and wisely counselled and aided if in need.
It is not generally known that in the infancy of the Highland Mod, when Lismore was sending a very efficient junior choir to meetings, it was largely owing to the financial support that Dr. Carmichael secured for it among his extensive circle of friends that the choir’s presence at the Mods was rendered possible.
It need hardly be said the news of his demise was received in Lismore with feelings of deep regret.
A snippet of further information is added by Professor Donald MacKinnon (who may have been the author of the above description):
Dr Carmichael passed away at his home in Edinburgh on Thursday, 6th June 1912, his ‘changing’, as the Gaelic puts it, being peaceful and unexpected. On the following Monday he was buried, in the simple Highland manner, in St Mo-Luag’s Churchyard, in the Island of Lismore. His fellow-islesmen carried the coffin, covered with his plaid of Carmichael tartan, on their shoulders from the landing-place, and the son of the minister who had baptised him conducted a simple Gaelic service.
The inscription on the stone was designed by Carmichael’s son Ewen, but can only be read with difficulty now:
M’ANAM • A’BHI • AN • SITH
AIG • SORCHAIR • NA FRITHE •
MICHEIL • CRODHAL
AN • COMHDAIL • M’ANAMA: