The Extinction of the Last Chough in Lismore 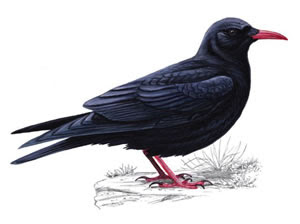 Previously in the blog we noted a story about the killing of the last auk in St Kilda. This snippet of information was picked up by Alexander Carmichael but we don’t know from whom he got it, other than presuming it was someone with local knowledge, and he goes into far less detail than his previous story about the auk – as it was far more interesting and perhaps more controversial in any case – and so he notes down the anecdodte as a matter-of-fact event amongst other observations. The event probably took place within living memory but no date of this wanton act of destruction is actually given. The notebook, from which the following extract is taken, was compiled during 1883:
Draithean-beag behind
Salen was a well – Lianai
ach grows on top. Cover-
ed at half flood. Close
to this is Ua[mh] nan cathag
nan casa dearg.
Last of these killed by
a Rankin F[ort] William
Stalagmites & Stalagtites [sic]
in this caves which are
very fine.
Cathagan nan casa
dearg has bill red. ?Et bine?
Larger than crow & very
beaut[iful].

The cave in which the cathag nan casa dearga (jackdaw of the red legs), or chough, lies near Salen on the west side of the isle of Lismore. They are larger than crows and are quite distint because of their matching red beaks and red legs. According to the RSPB website, the type of habitat favoured by the chough is rocky coats with short grassland. Certainly there is plenty of this around Lismore and its environs. Choughs (pronounced "chuffs") may have been more common then than now and this probably reflected in the fact that the in RSPB have reserves for them in South Stack, Anglesey, Loch Gruinart, Islay, and the Causeway Coast in Northern Ireland.
References:
CW 120, fos. 34v–35r
Image: Chough (Pyrrhocorax pyrrhocorax)
at 17:28